What's On My Mind?

That's what Facebook asks when you are about to post something. I usually don't reveal much of what's on my mind on FB, but instead just post about what I'm doing. What's on my mind is often a bit more complex.

Like today. What's on my mind today involves three big topics: soccer, politics, and the beauty of autumn around me. 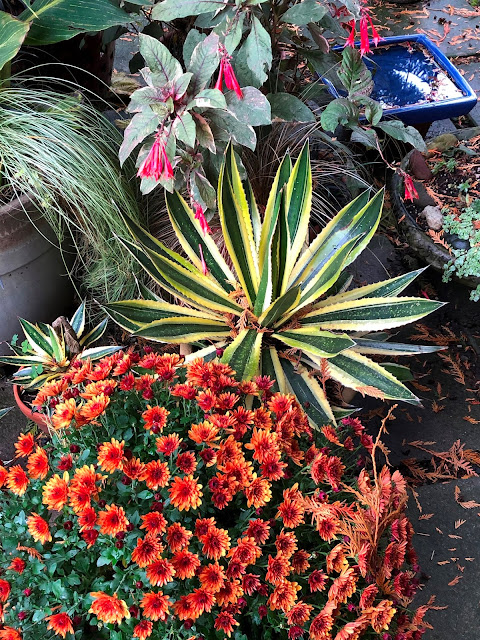 Soccer is easy. We will be going to Irene's JV game today at 5:30, and again at 5:30 on Thursday. Her high school season winds down to a close next week. Isaac plays on Sundays, and we are there for most of his games. The Sounders, our professional team in Seattle, are in the playoffs. Last Saturday we were there as they played the first round and have advanced to the conference semi-final round, which will be played tomorrow, Wednesday evening, here at our home stadium. We'll be there.  Lot's of soccer! 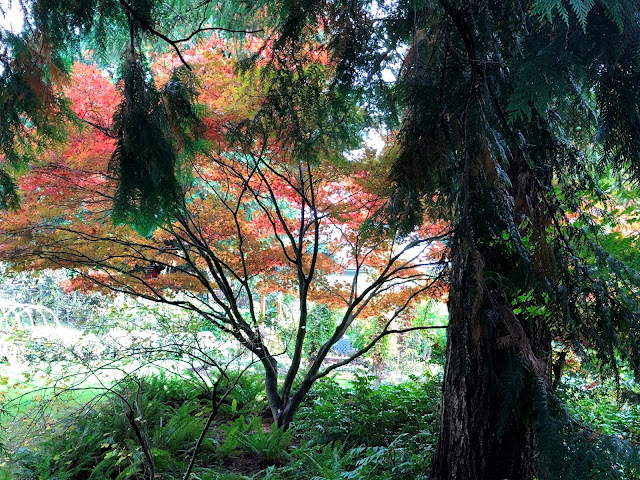 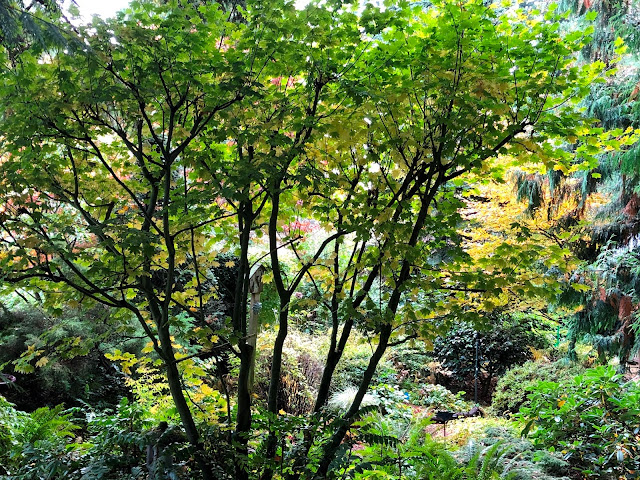 The beauty of autumn is all around us and we are looking forward to the return of some sunshine tomorrow to light up the glow. We are planning a visit to an Asian style garden for Thursday to see lots of fall color. I took a few photos on our garden this morning, and then took neighborhood and park photos as we went for a walk later in the morning. I'll post them here interspersed with the third subject, politics. Politics needs to be prettied up, and I intend to treat it with the lack of respect our current administration deserves. 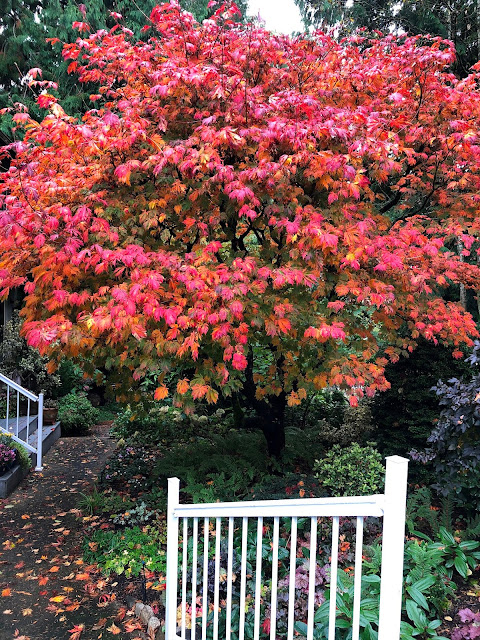 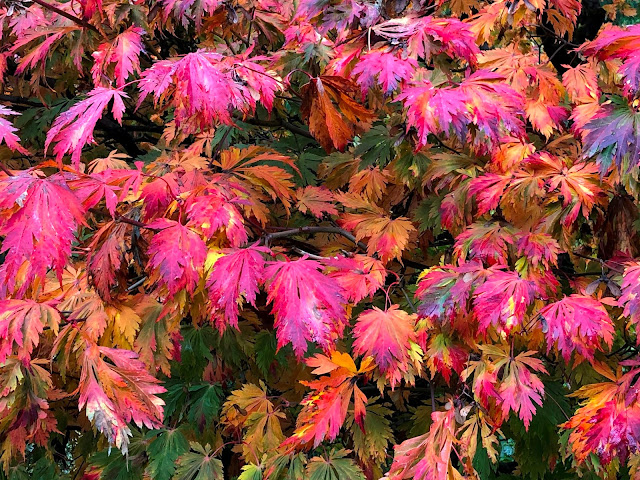 Headline #1 - Our Constitution is Phony!
That was the news today as the president declared that the emoluments clause, an article of our constitution, is "phony", or at least it couldn't possibly apply to him. After all he's the president and he can do whatever he wants, including enriching himself through holding international meetings at his private golf club. He's not happy about having to change his plans. Poor Donald. 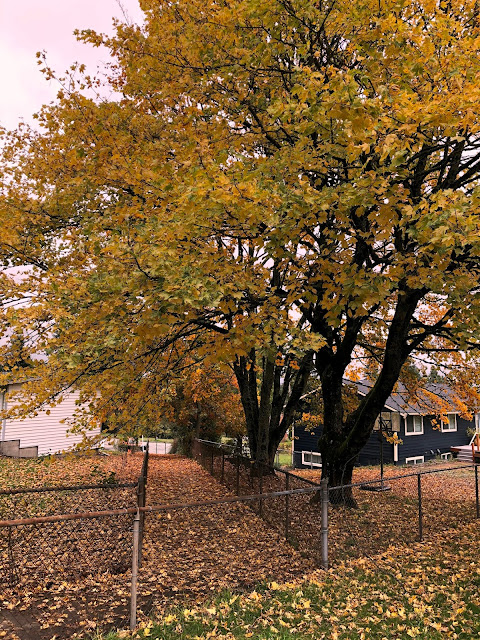 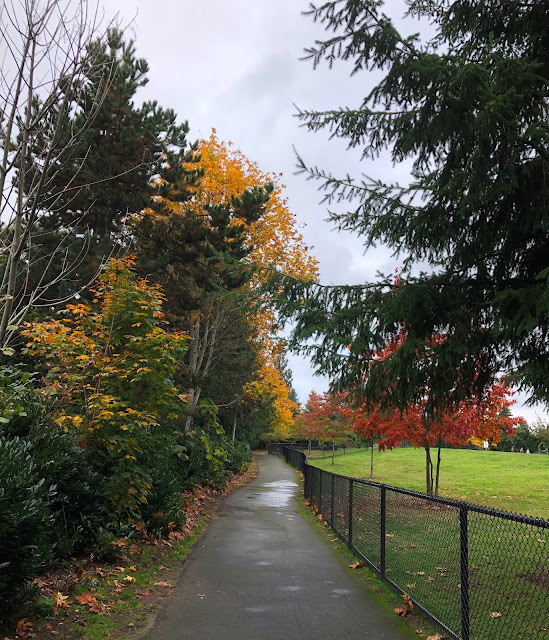 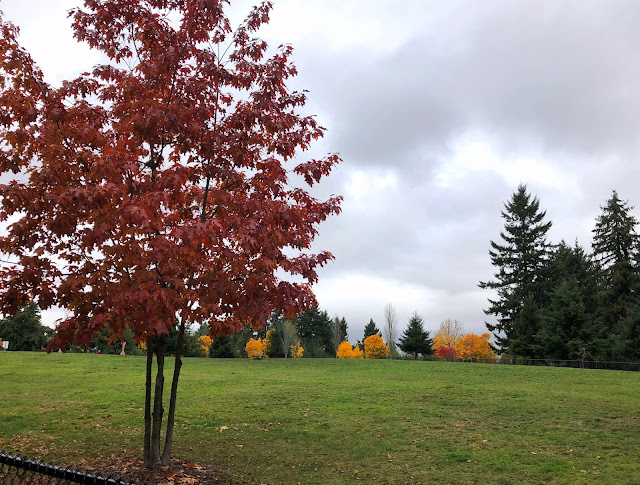 Headline #2 - Rudy Said Ukraine Did It!
Actually this is not new news. It is the conspiracy theory that Giulliani sold Trump that inspired him to ask Ukraine to "investigate" the whole DNC server hacking during the 2016 election. While it has all been disproven, it is much more convenient to blame Ukraine for interfering than Russia and his buddy Putin. Oh, and by the way, Ukraine, check into dirt on the Bidens too, if you want to get that military money congress already appointed to help you protect yourself from Russian invasion. 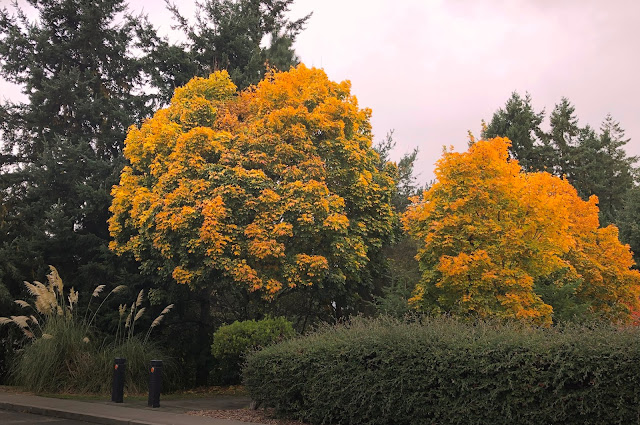 We need  another walk in the park now. 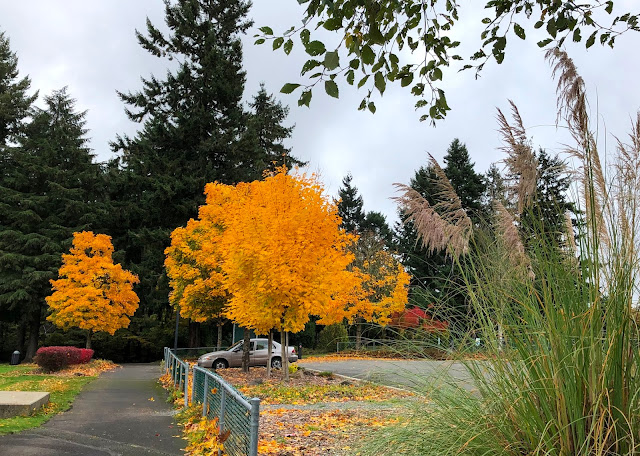 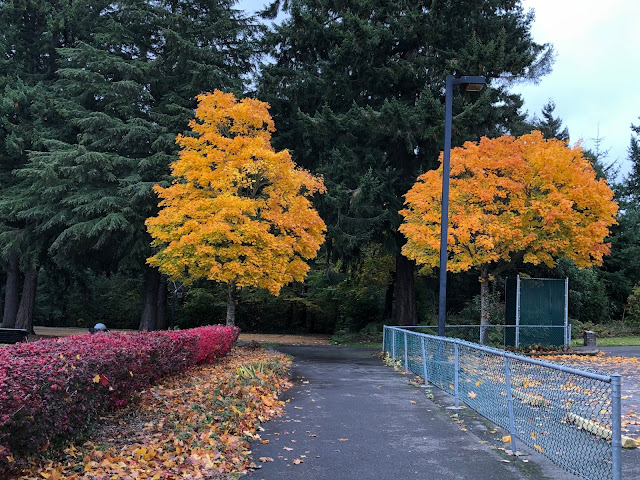 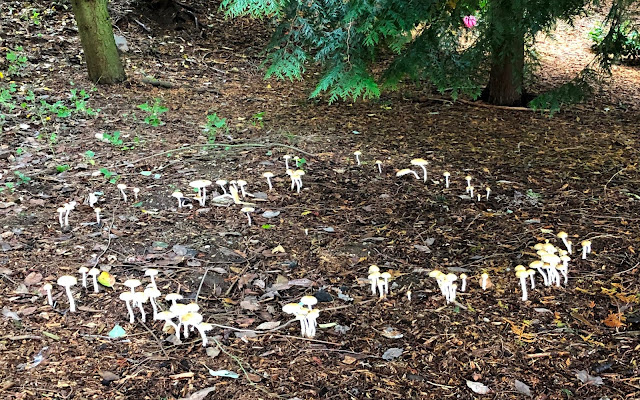 Headline #3 -Hillary Didn't Do It!
Yeah, I know, but it took all this time for the State Department, now under the Trump Administration, to exhaust themselves and finally issue their findings that they could find no evidence of deliberate mishandling of classified information by HRC and her State Department staff. The announcement was buried somewhere in the back pages - no headline here. Whew! sure glad we got that one solved.
Trump likes to carry on about being the victim of a "witch hunt" and even a congressional "lynching", an unfortunate choice of words. However this "witch hunt" is turning up more messes every day. It's hard to keep up. And what is being revealed is actually not funny at all. It's downright frightening. 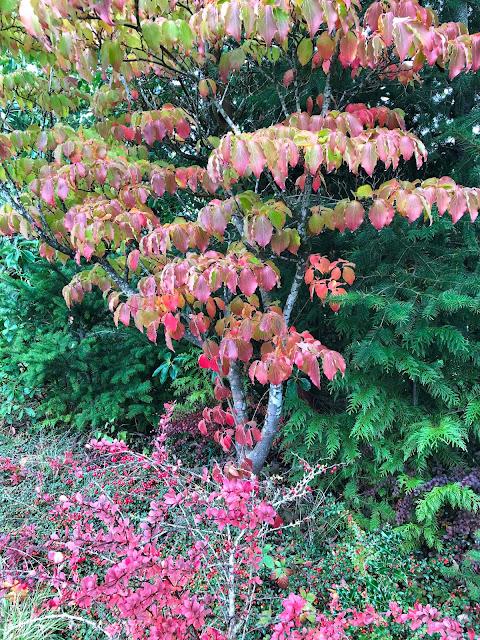 We can finish our walk now, back out of the park and through the neighborhood. 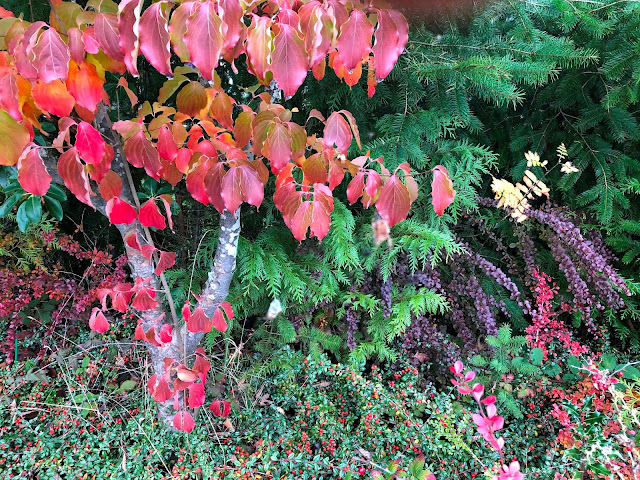 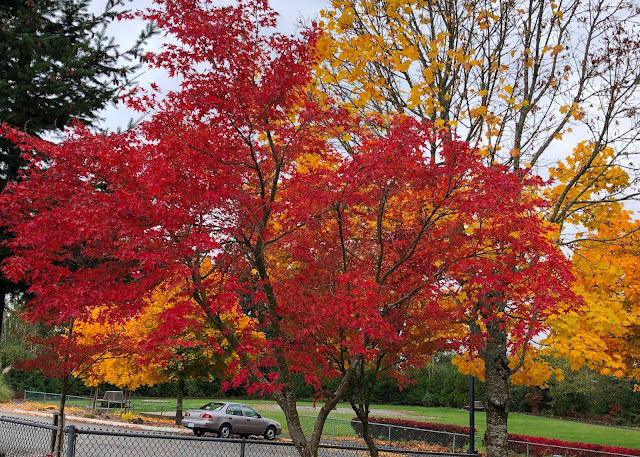 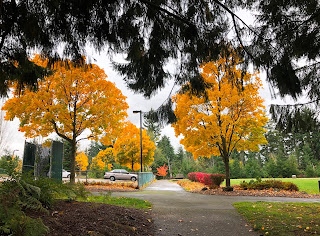 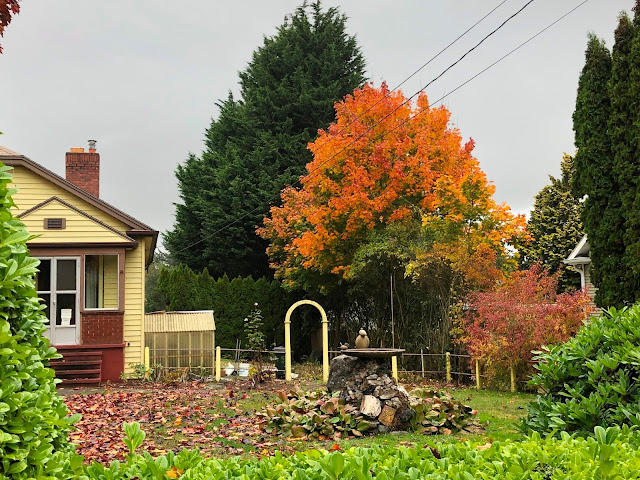 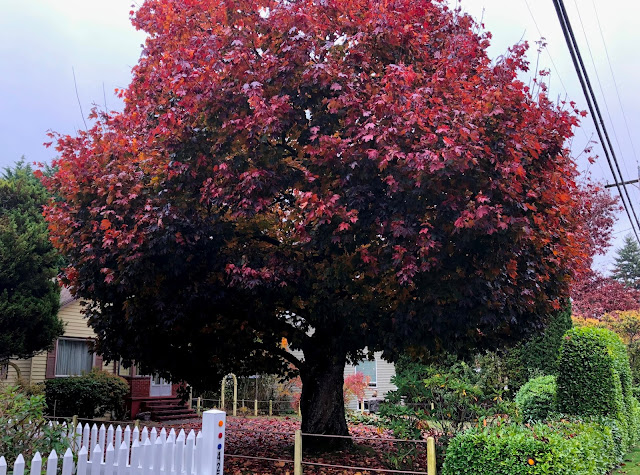 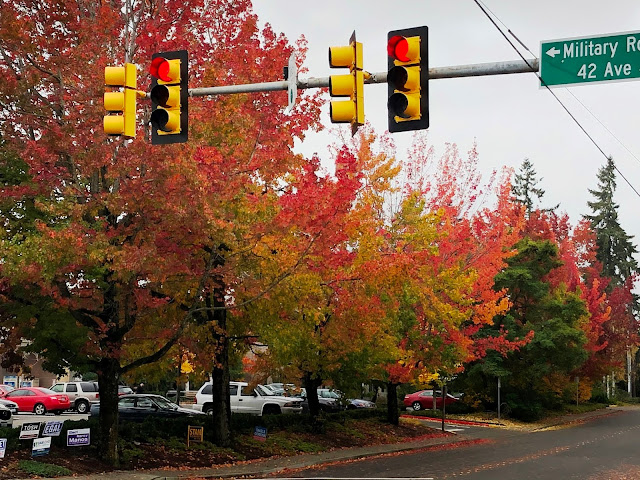 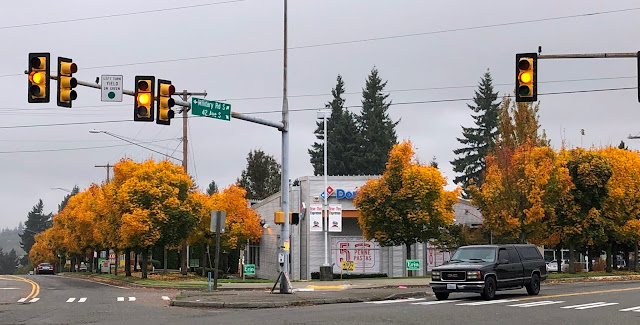 Back home it was time for lunch, and then we VOTED. We have all mail in ballots here, and while this was just an election for some state measures and local offices, that's important too. Voting is our defense against tyranny. 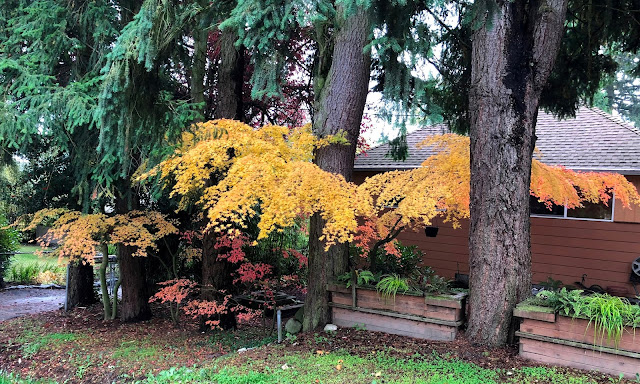