With a lot of time on my hands, and still restricted from much physical activity, I have been reading our daily newspaper much more thoroughly these days. I can't tell you that is a good thing, necessarily, since the news these days is not very uplifting, but I do feel much more informed, and that's a good thing. 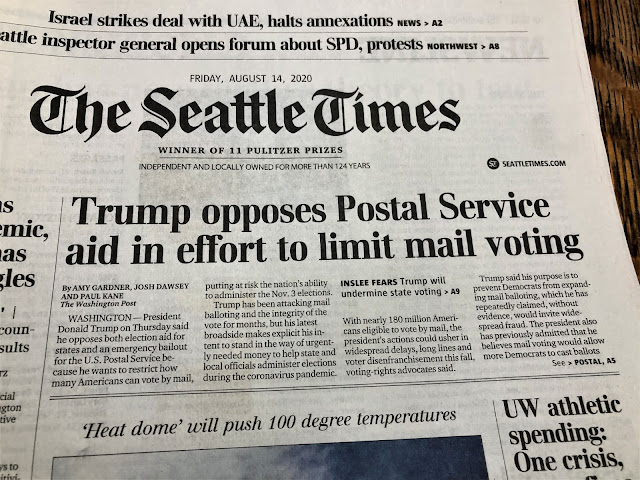 This was Friday's headline. The attack on our national postal service is very worrisome to me. The right to vote, and reversely, voter suppression, are top issues for me. I support with a monthly donation an organization called Let America Vote.

That our president would actively work to undercut our constitutionally guaranteed Postal Service, a service that is vital to many,  as a means to suppress votes and gain re-election is abhorrent to me. It smacks of authoritarian government tactics that we see in non-democratic nations around the world. Make no mistake, Donald Trump is an authoritarian by nature and would love to be President for life. Authoritarians use whatever means they can to stay in power.

A current example, also in the news now, is Belarus, where the dictator Lukashenko has just "won" another term. Of course these are rigged elections, and this time it looks like the Belorussians have had enough. The protests are growing despite the police brutality to suppress them, and in today's paper, the oppressive tactics seem to be easing as the protests grow. There may be hope there.

I have read quite a bit about Kamala Harris, our new Vice Presidential candidate, and I find her well qualified and impressive. Of course, impressive women become instant targets so the racist, misogynistic slurs, disrespect, and fear mongering are already in full force. The latest is the new "birther" movement. Since her parents were not citizens, the claim is that she in not an American and therefore not qualified to hold office. But the law is clear. She was born in the United States, and therefore she is a citizen.

You may have heard about the new Georgia candidate for the US House of Representatives, Marjorie Taylor Greene. She is a construction company executive who spouts anti-Semitic, racist, and xenophobic views. She ascribes to the conspiracy theories of QAnon. Now QAnon is hard to define, but it appears to be one source who posts on social media and has a huge following. The gist of the message is that Trump is battling a cabal of deepstate saboteurs who worship Satan and traffic children for sex. Remember Pizza Gate? There's more, but that's about as deep as I need to dig to wonder at the mind that can embrace such thinking. Yet millions do. And candidate Marjorie Taylor Greene appears to be unstoppable to be elected in November.

And there you have a smattering of the news I have been reading about. It all sounds so dismal, but there are a few things we can do. First, when you get your ballot for the November election, treat it like the precious document it is, vote early, and send it off safely. Then, and more urgent, consider contacting your own US Representative and Senators about your concern for the USPS and our upcoming election. There are things Congress can do, but time is running out, and they need to act now.