Oh Christmas Tree, How Laden With Memories Are Your Branches!

The last thing to go up in our holiday decorating scheme is the Christmas Tree.

It's an artificial tree, one we bought several years ago to replace a very tired previous artificial tree that had to be assembled branch by branch, and then lights had to be strung on it.  We went to artificial trees long ago when real ones made the kids' allergies act up.

This new one comes in three sections, pre-lit, and all we have to do is get it out of the box, get it lined up, find the cords and get them all connected, and wah- la! A tree! 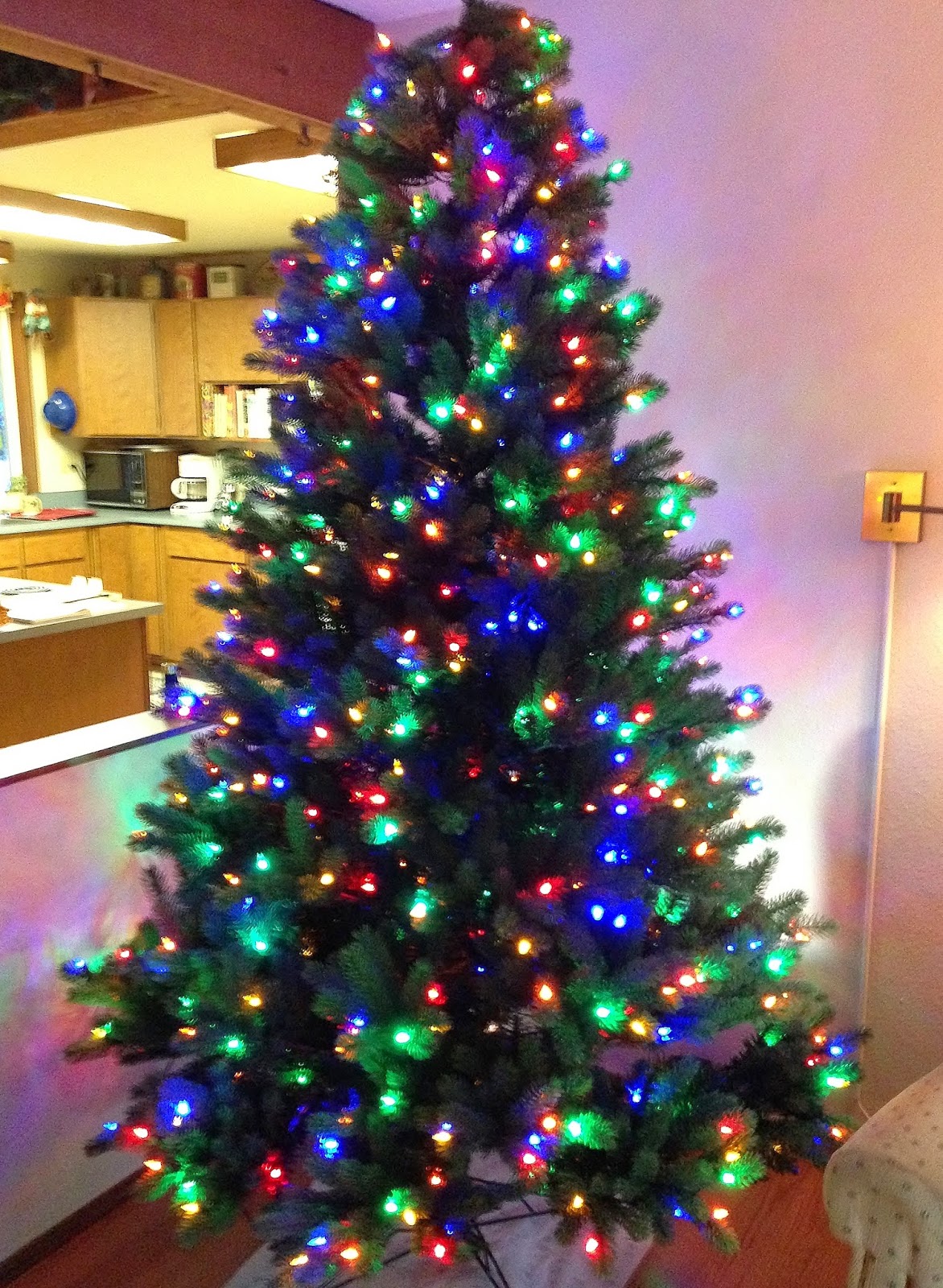 That's the easy part.  Now we start opening the three tubs of ornaments we have been collecting for the last 45 years.

Another day later, and finally it is finished. 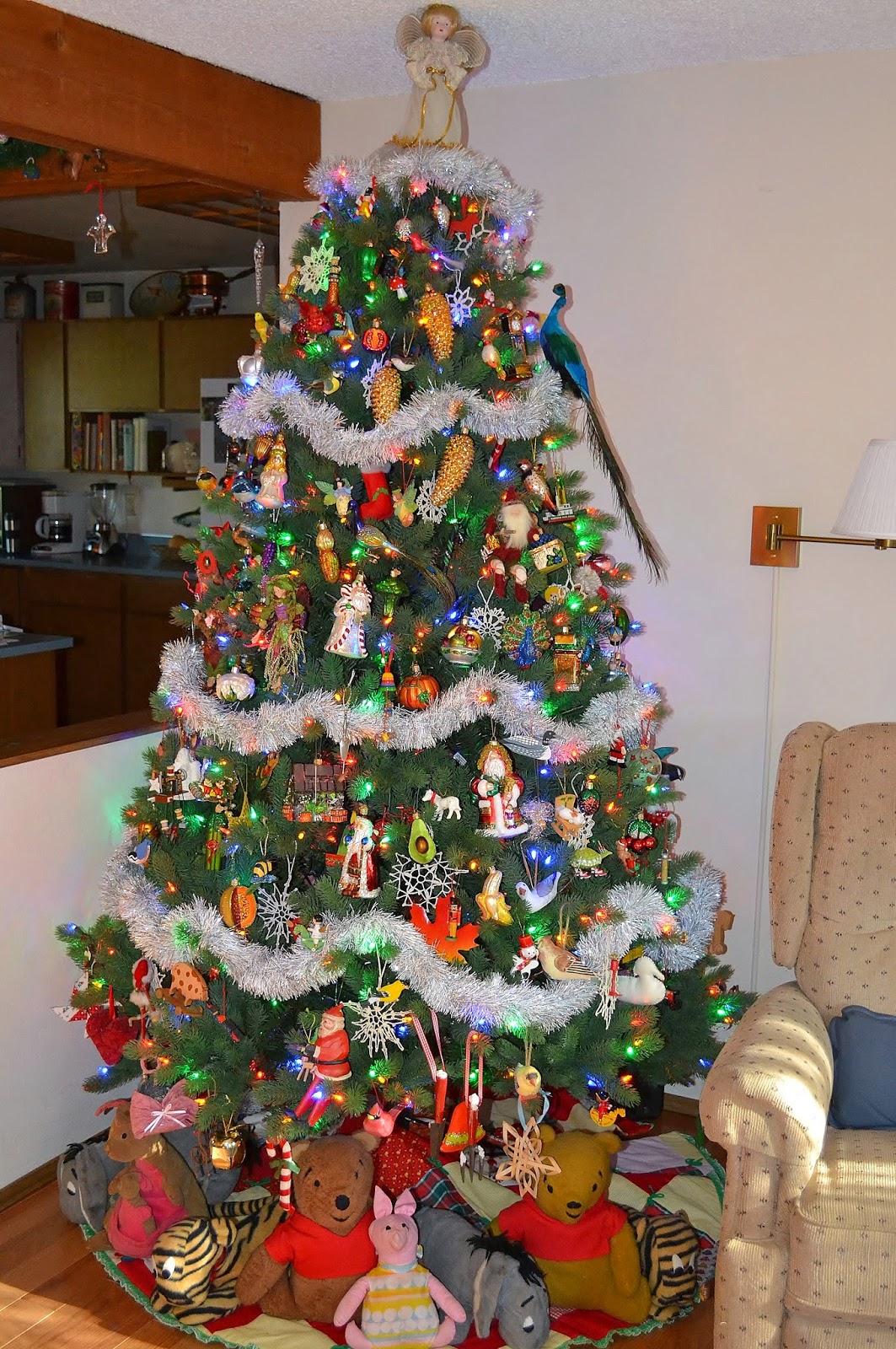 I confess, there are still a few old ornaments in the tubs, but they have not made the cut for a few years now.  I just haven't been able to get rid of them.

What do we have on the tree?  There are horses and pigs from when the kids collected them - Jill had horses, Jake had pigs.  There are ornaments that we gave the kids as advent gifts, and ornaments that were given to us or the kids, including teacher gifts from other people's kids.  There are ornaments that mark events, like our first computer, or much more recently, our new fireplace, or the grandfather clock because we brought my mother's clock home when she passed, pets like our white cat from long ago, and birds of all kinds because of all the bird watching we've done from right here at home. There are ornaments from our travels - from Germany and Austria and Sweden and Norway, England, Italy, Greece, Arizona and Utah and New Mexico and Nebraska and Colorado and Vermont and New York and Pennsylvania and wherever else.

Our hobbies are there too, especially gardening - garden tools, bugs, garden fairies, even a glass greenhouse.

Of course there are Santas, of all sizes and styles.

Lately I have been collecting glass fruit and vegetable ornaments.  You can find a potato, tomato, avocado, broccoli, cauliflower, pepper, pumpkin, melon, grapes, cherries, blueberries, strawberry, corn, acorn, and I forget the rest, and a pickle. 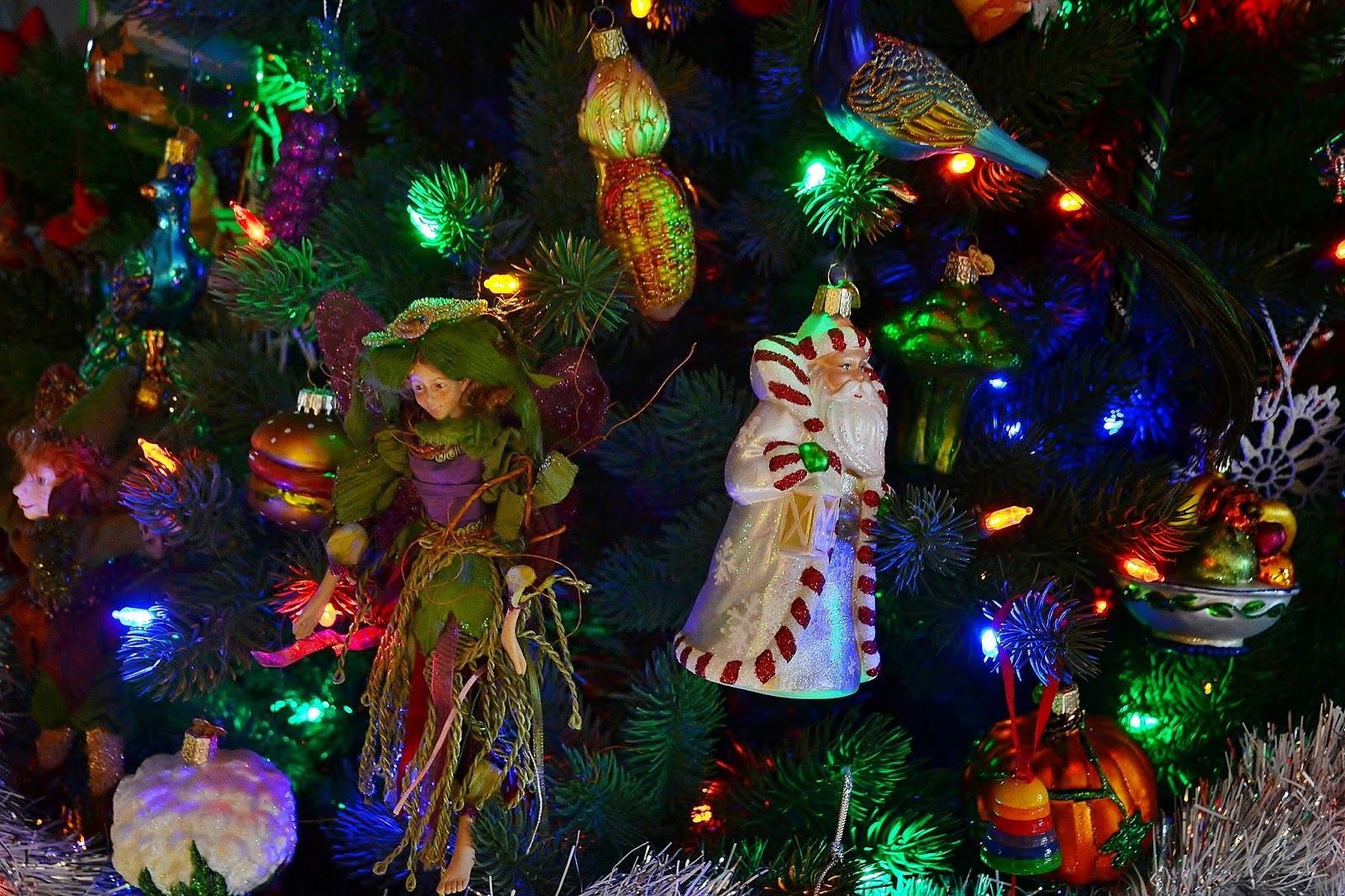 Birds and Santas, a horse,  and a strawberry and avacado↓ 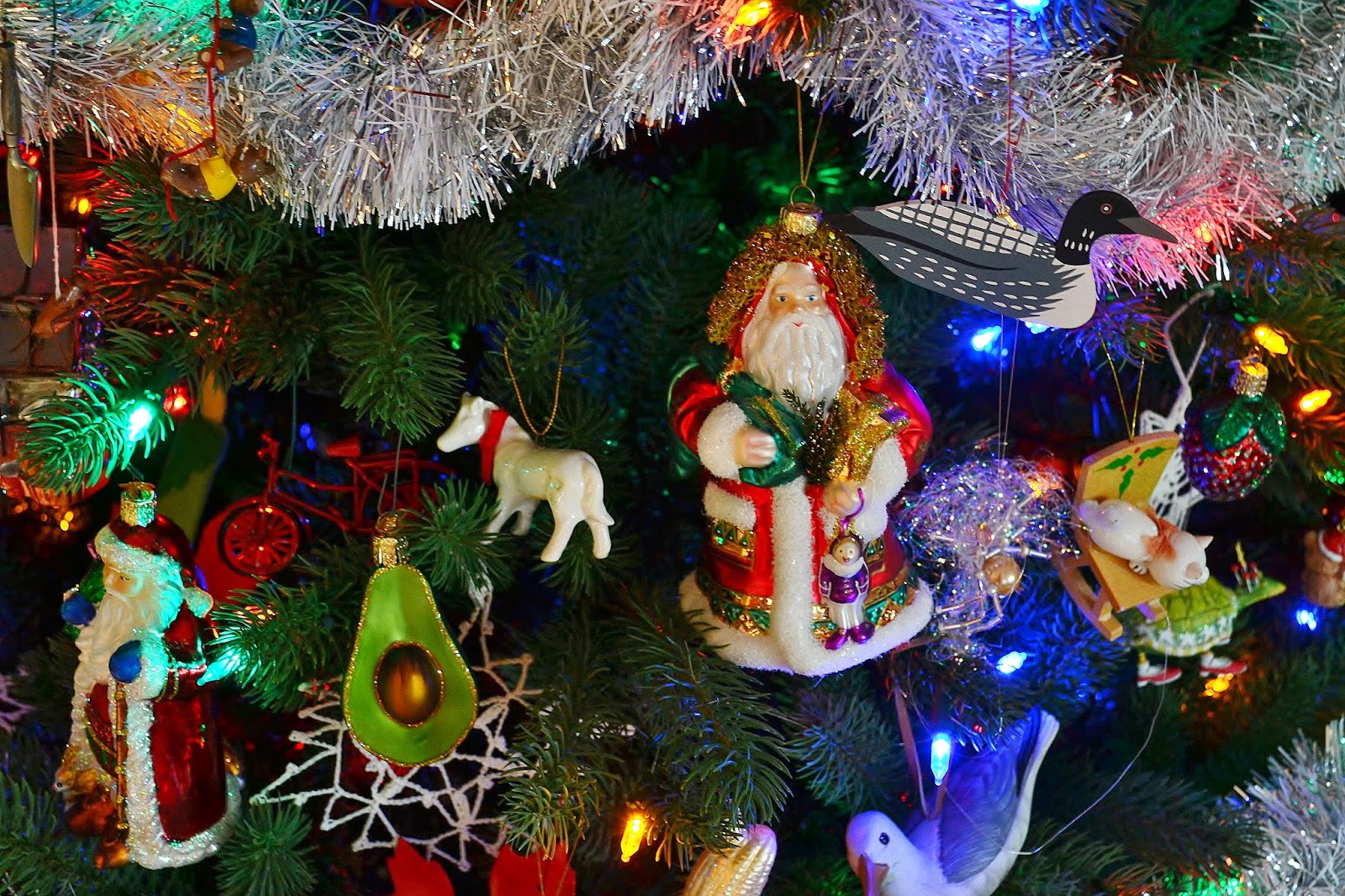 Peacocks and a fireplace↓ 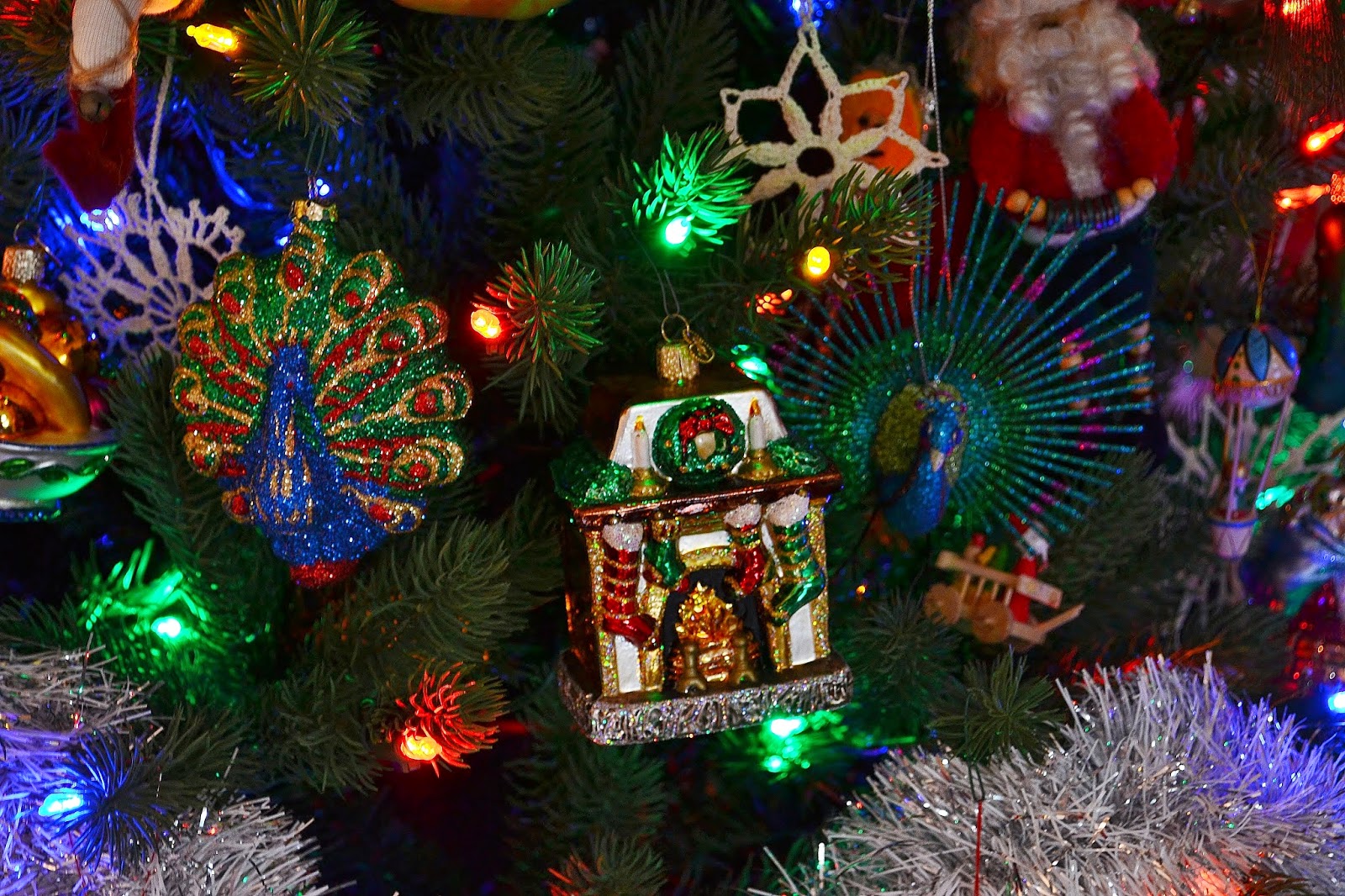 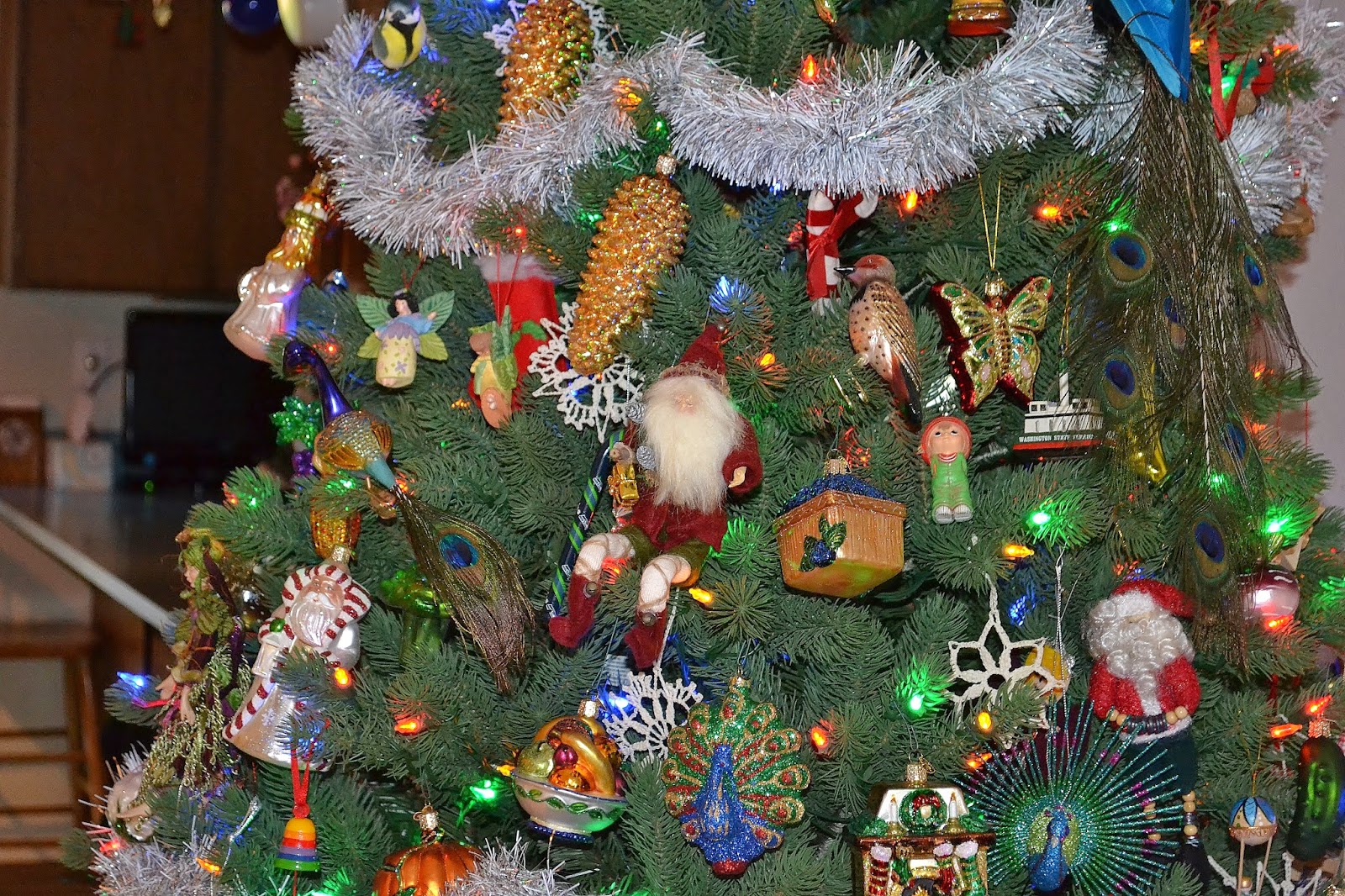 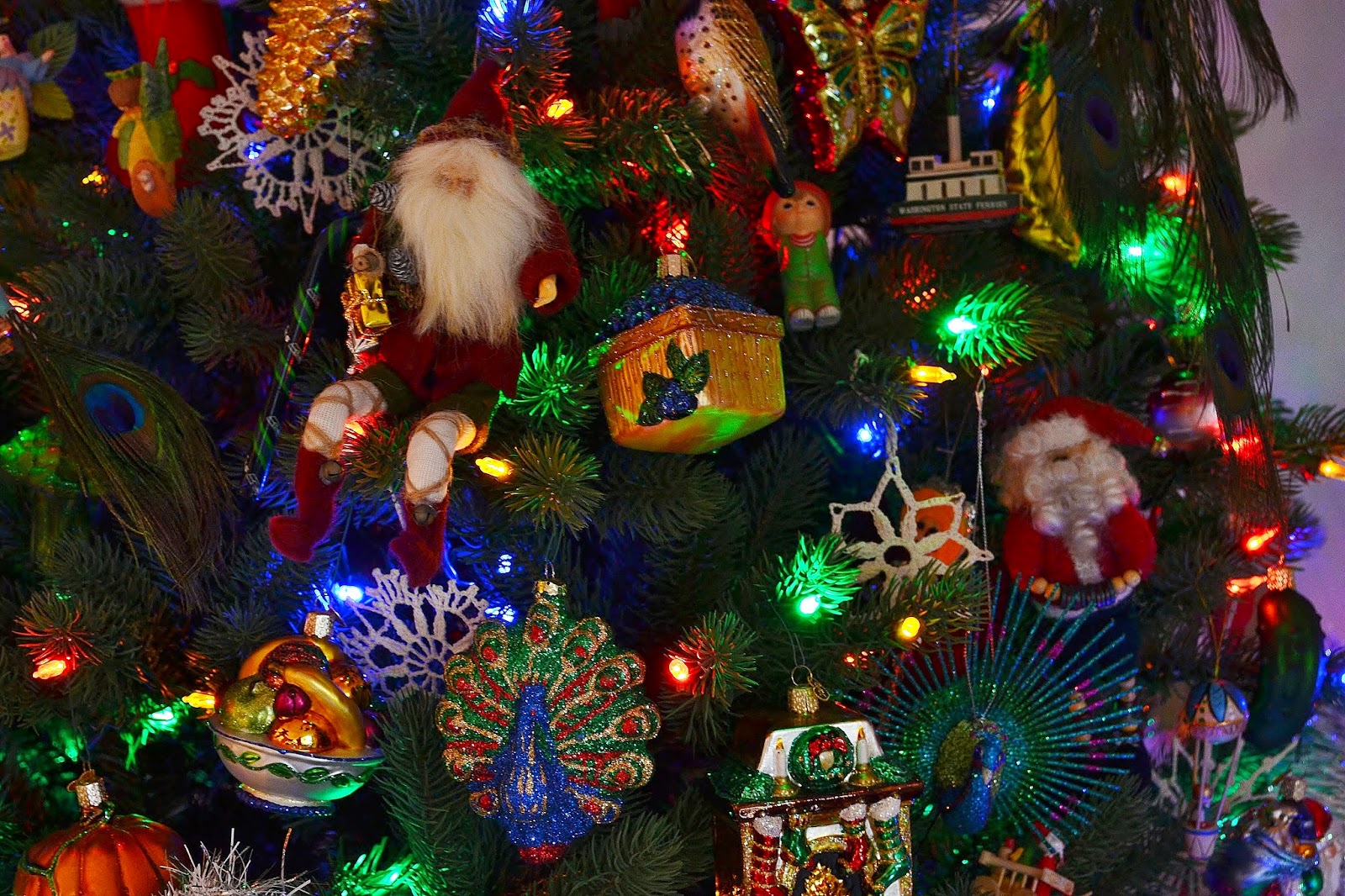 A green house, bugs, and a leaf from Vermont.↓ 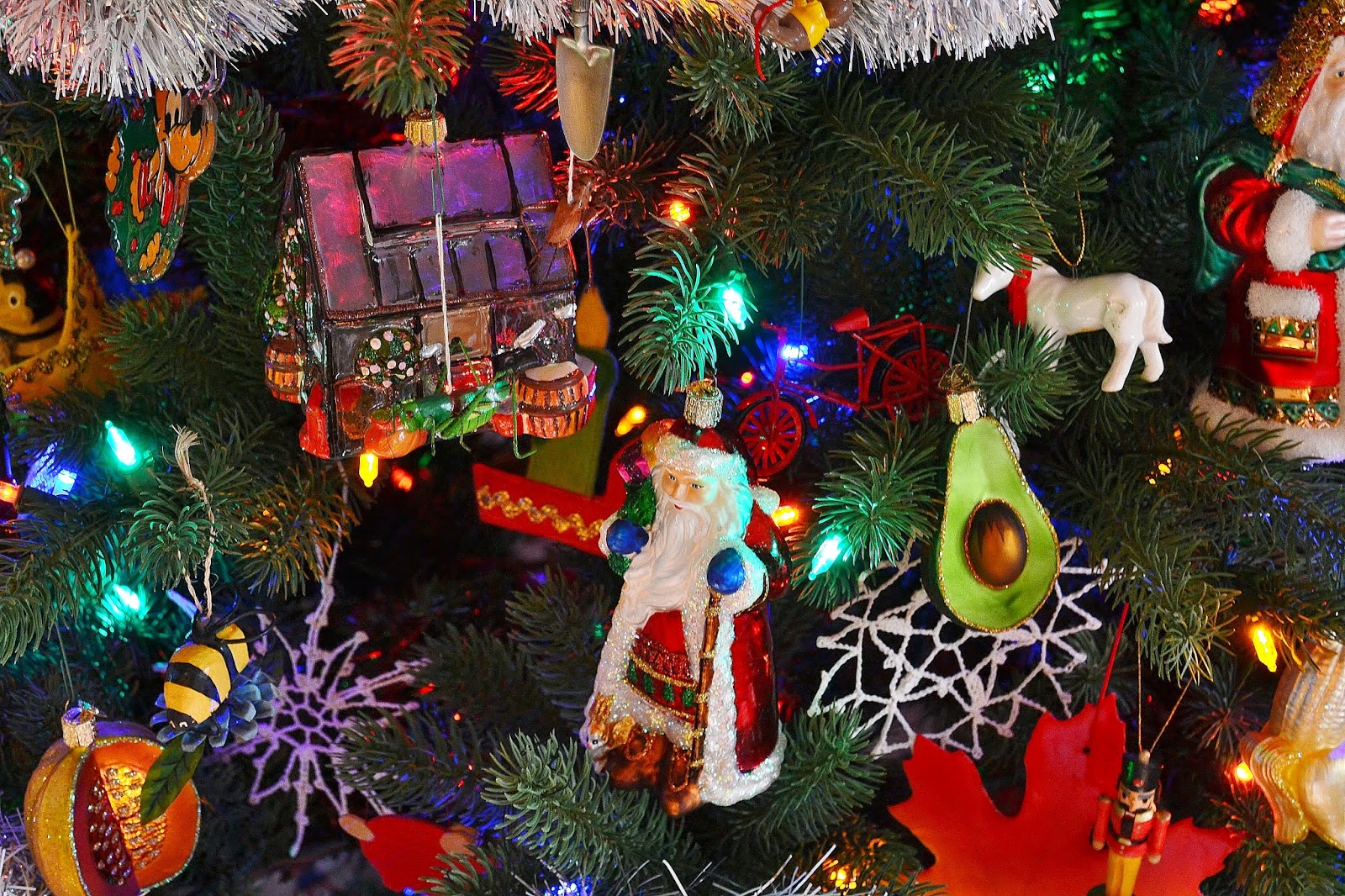 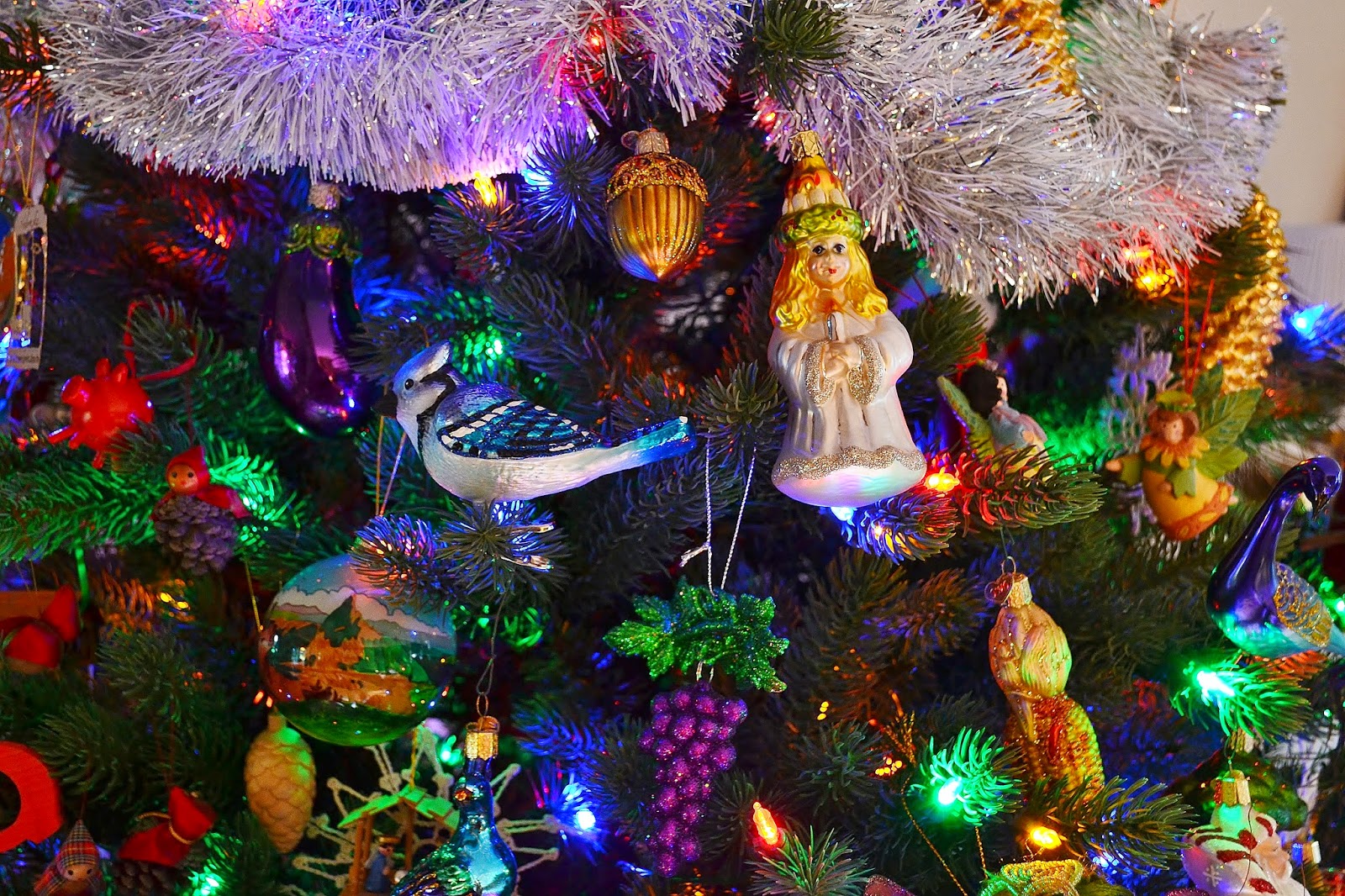 With all those Santas in the house, we needed an equalizer, a provision for those who have not been so nice.  This year we added a Krampus. Krampus punished misbehaving children.  In contrast to Saint Nicholas, who brought gifts to good little girls and boys, he brought sticks. It is said that he captured especially naughty children, stuffed them in his bag, and carried them away to his lair.  So you'd better watch out! 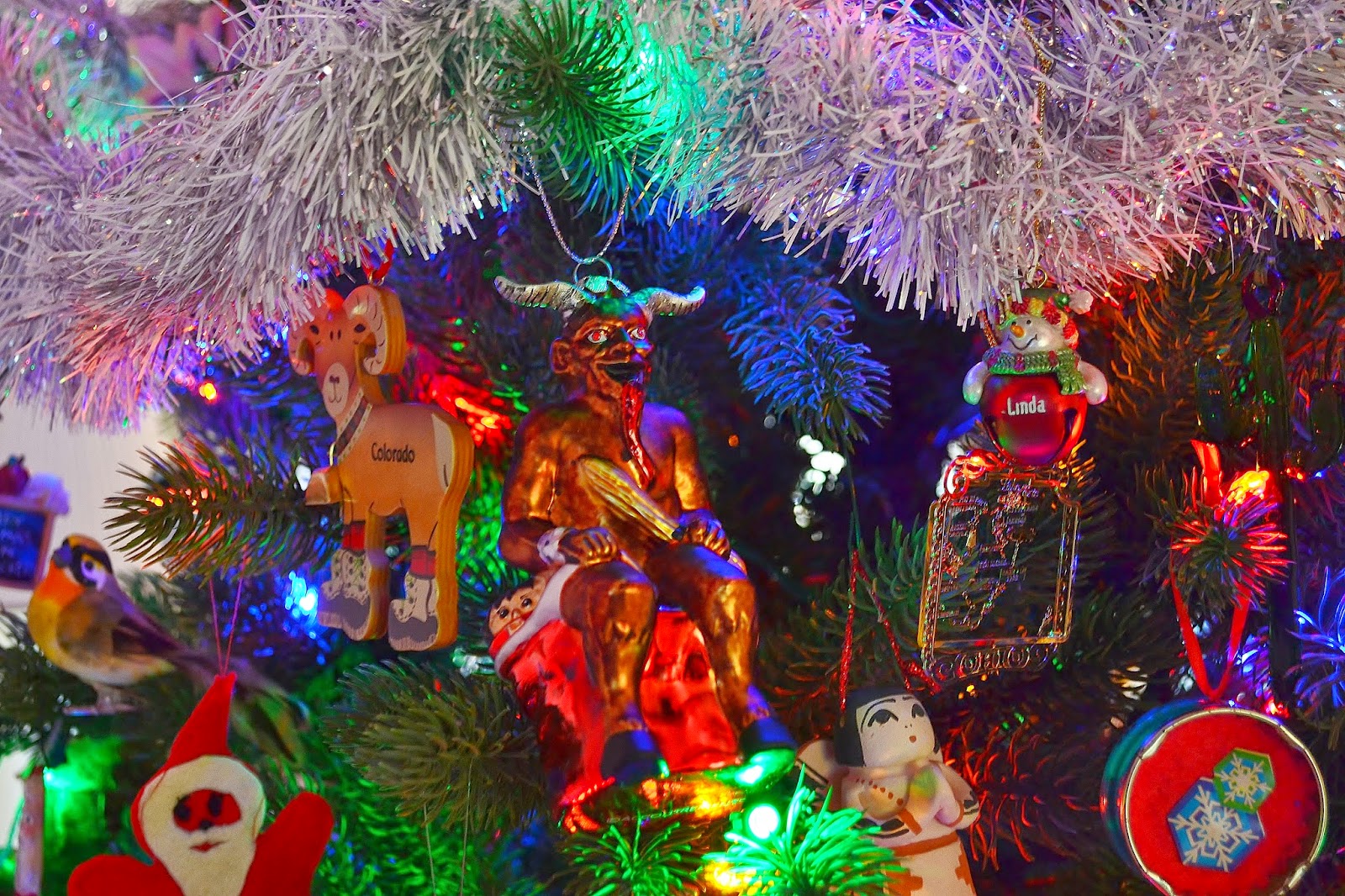 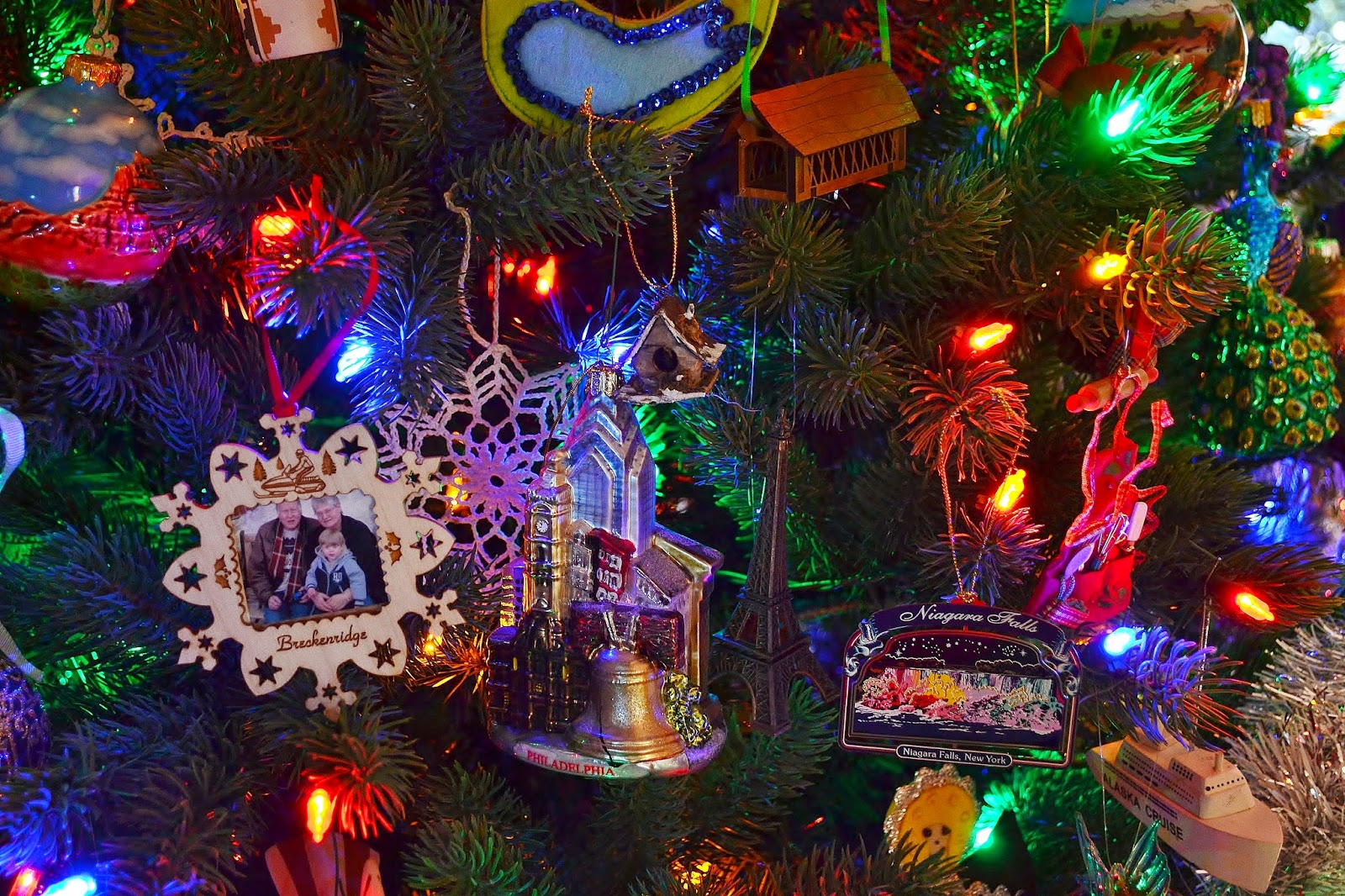 Mozart and fancy eggs from Saltzburg. ↓ 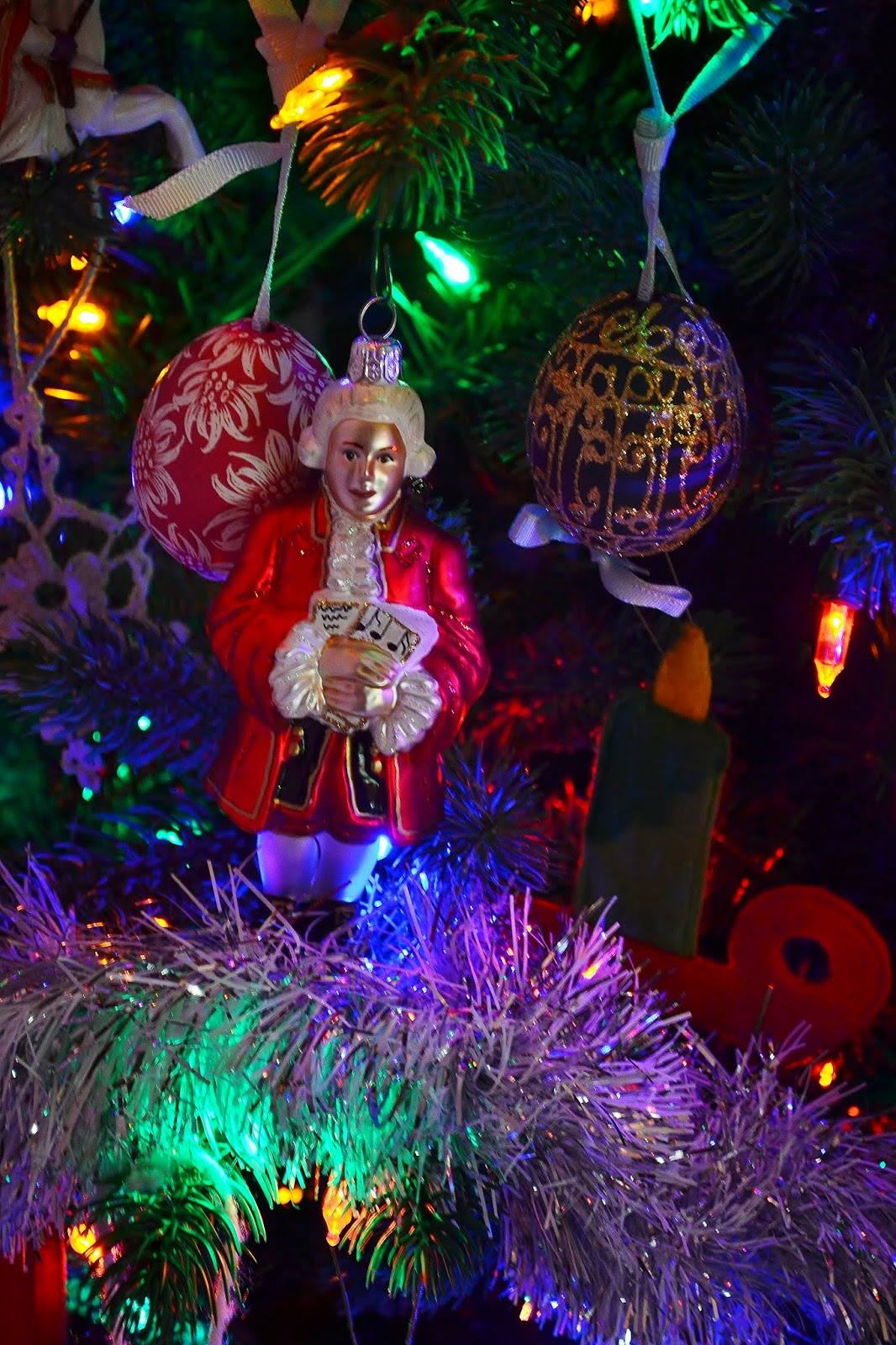 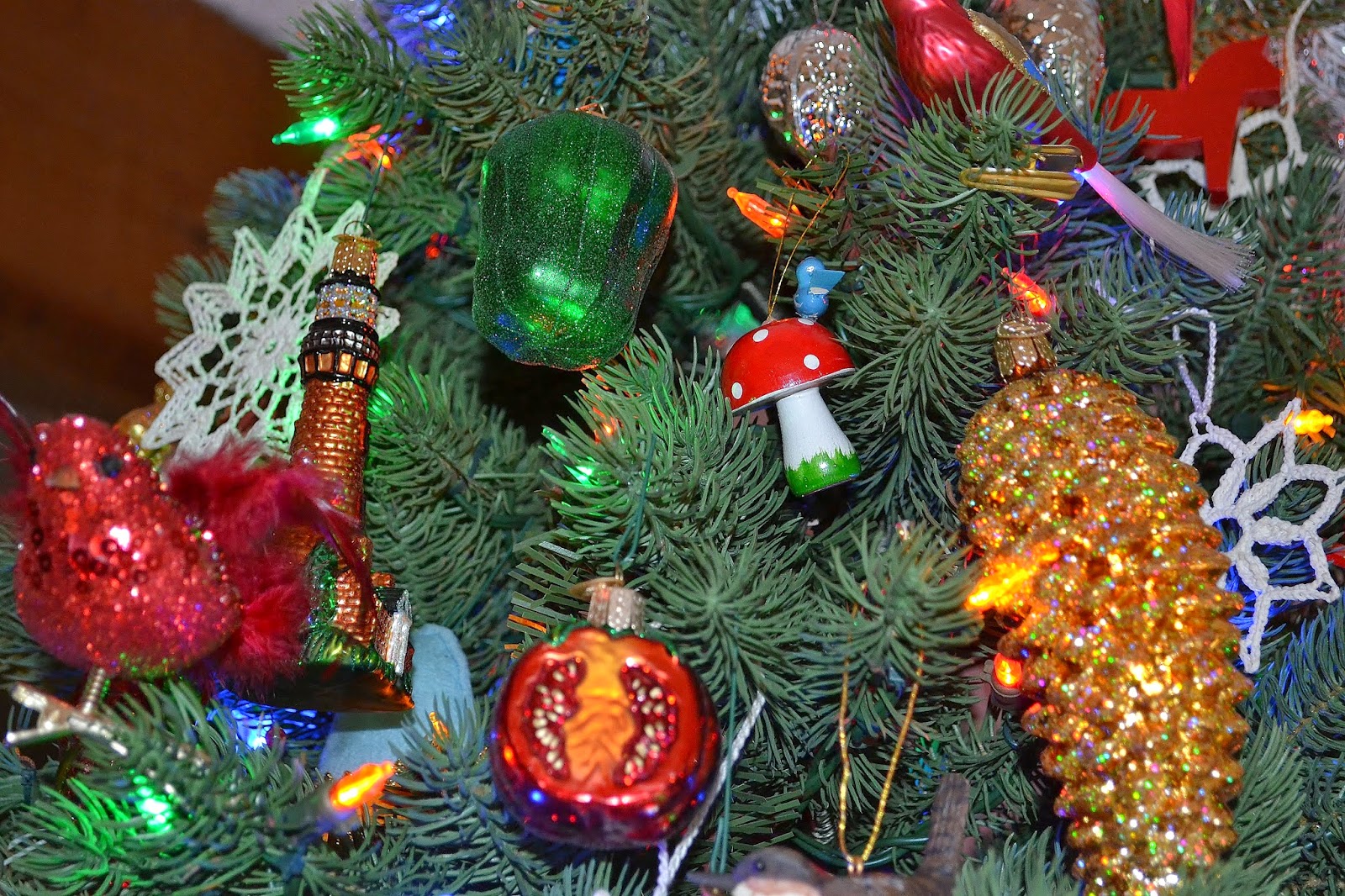 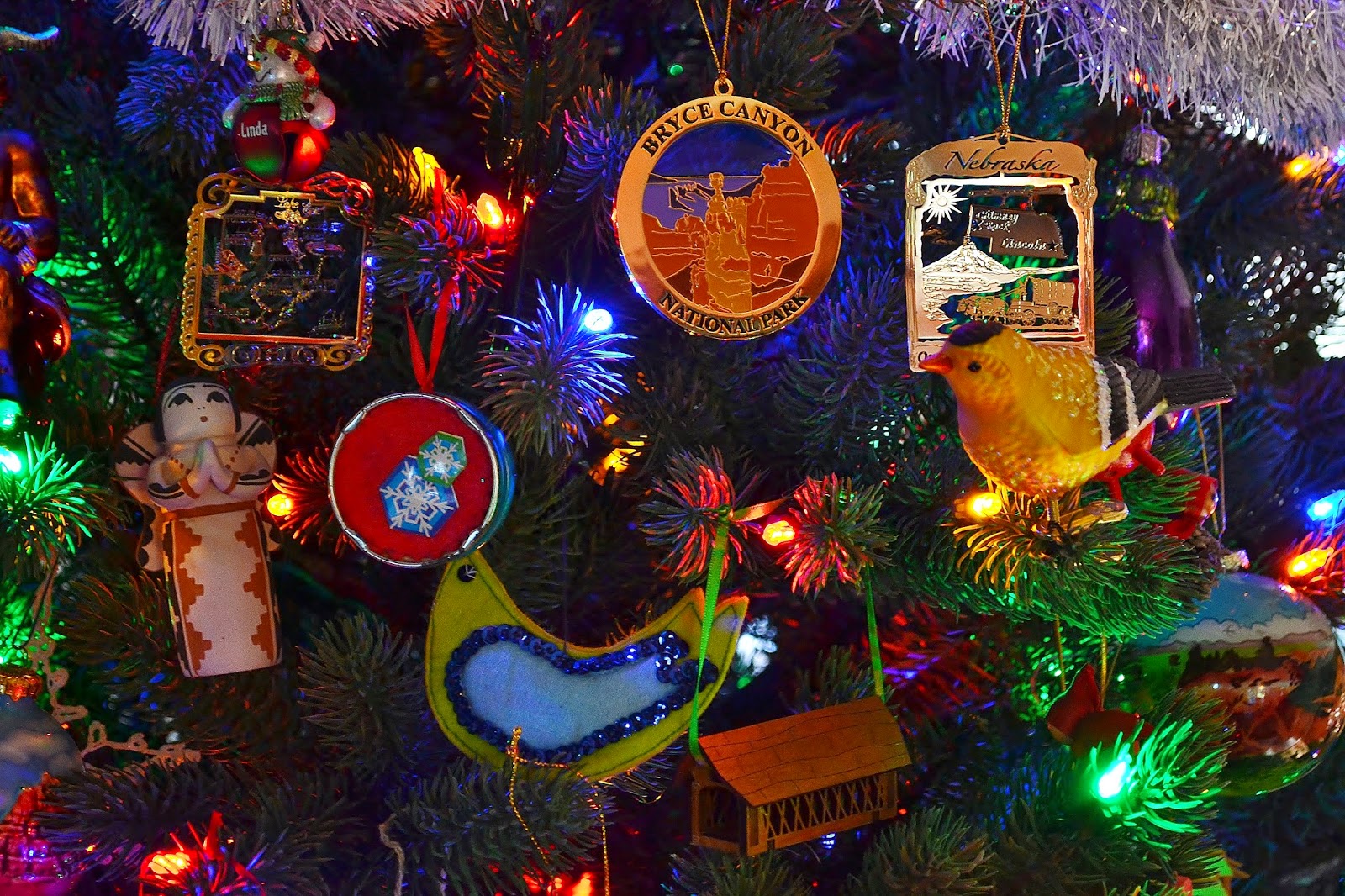 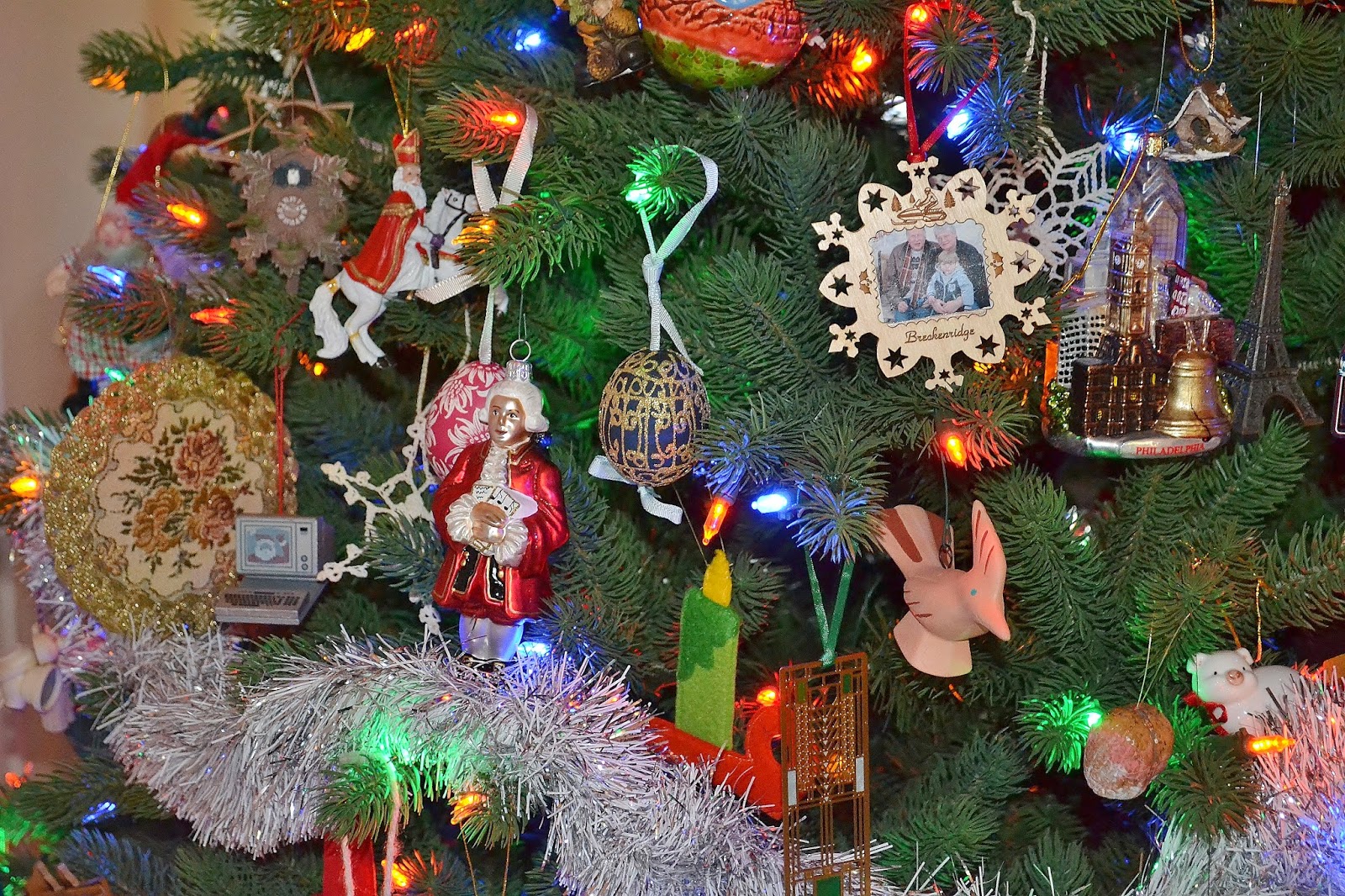 In the last two photos you might have noticed a baby food jar lid ornament and a rather dull walnut that has lost its glitter. These, along with the Styrofoam bell and the felt drum below, are some of the most precious of the ornaments.  They were made by our kids a long time ago when they were just little, and our tree and our lives were much simpler. 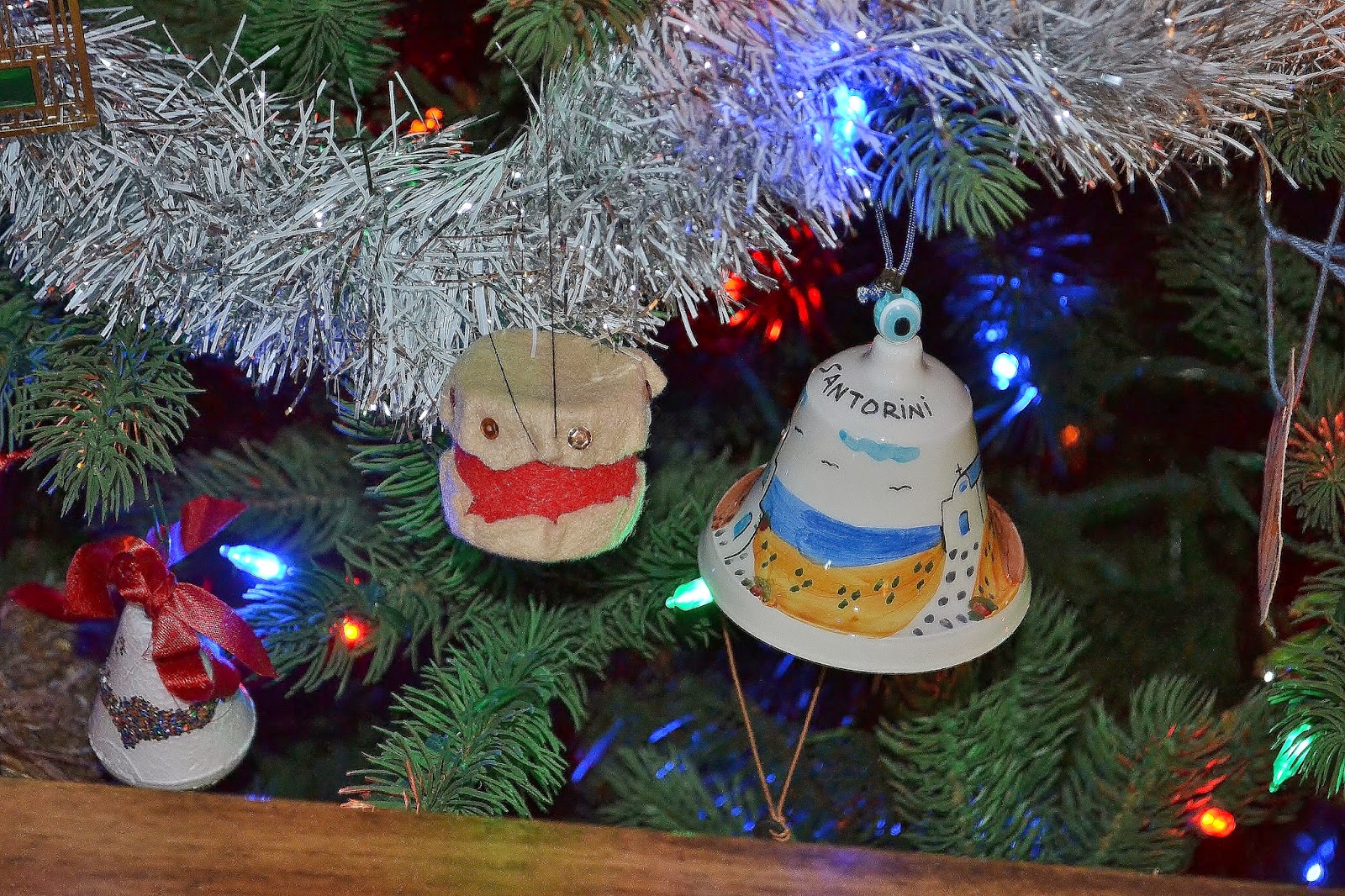 And Isaac's (oops, that would be Jake's stop sign, the son, not the grandson :-/ )stop sign takes a place of honor next to a new Santorini, Greece ornament. 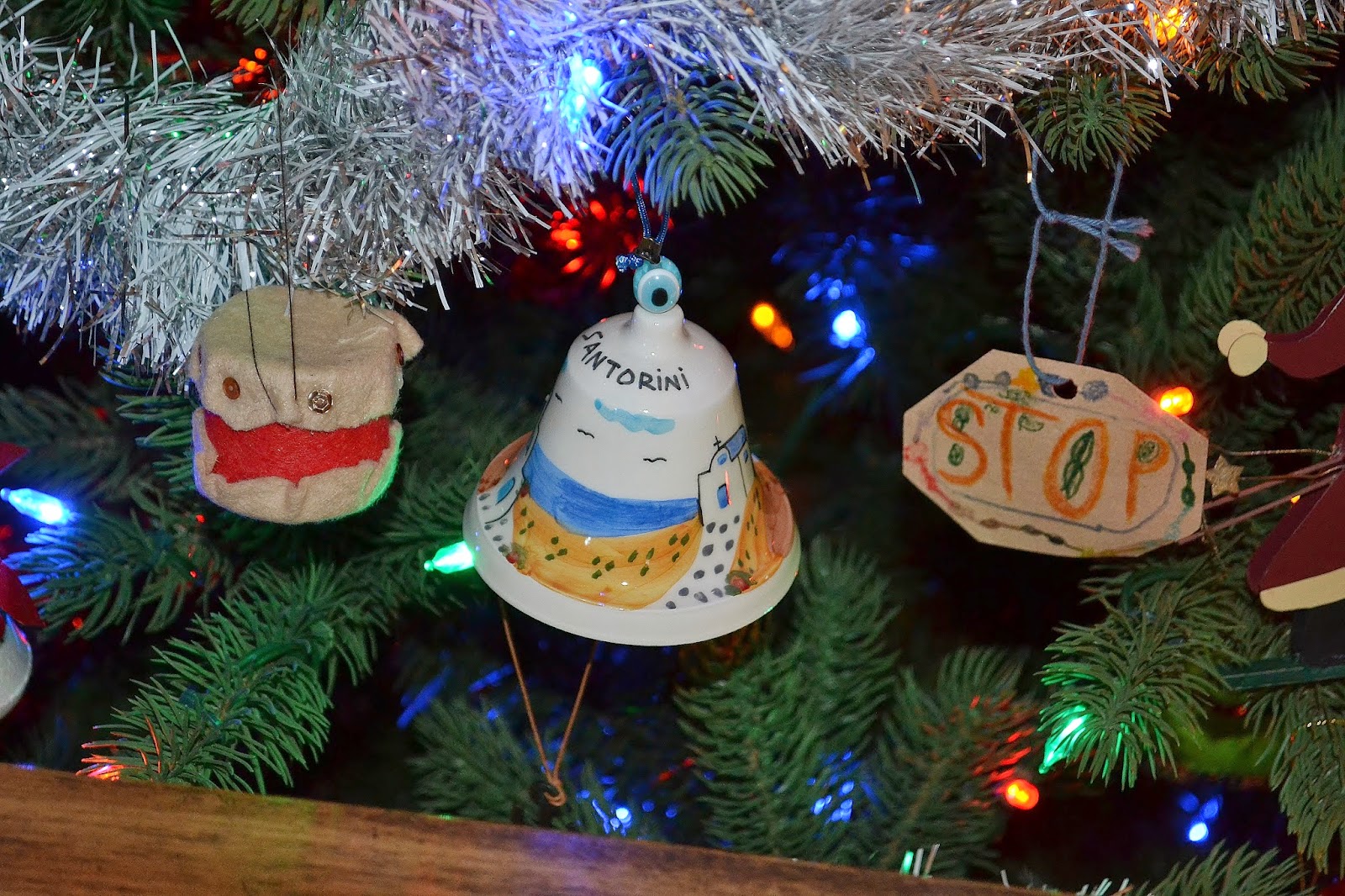 Will there be any big parties to show this tree off?  No.  We most likely will not even have gifts under it.  That will happen where the kids live. 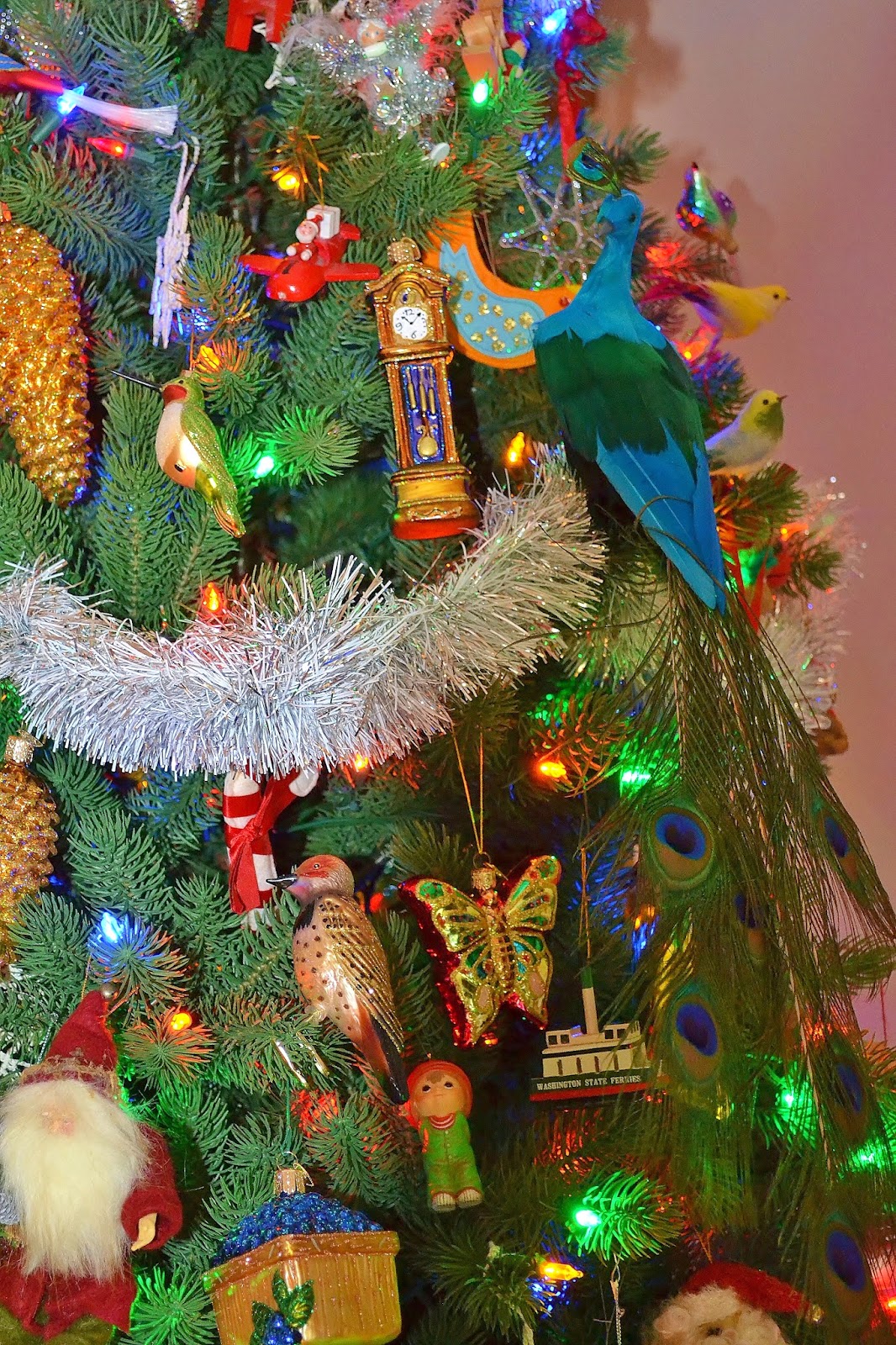 Addendum: The stuffed animals- those were made by Tom's mother for our kids when they were babies, Winnie-the-Pooh characters of course.  Piglet's nose was often wet, since it fit right in a baby;s mouth.