Today, Friday, we are finally getting some paint!

It has been a long week of prepping: pressure washing, lots and lots of caulking, scraping old flaking paint, replacing facia boards, searching for paint, and finally masking the windows.

This afternoon paint is being applied. It's hard to tell where because the color is the same. The easiest way to tell is where you see all of the caulking polka dots covered up. 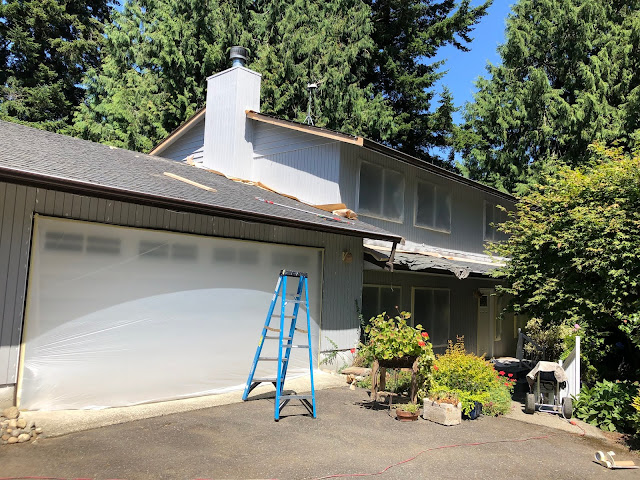 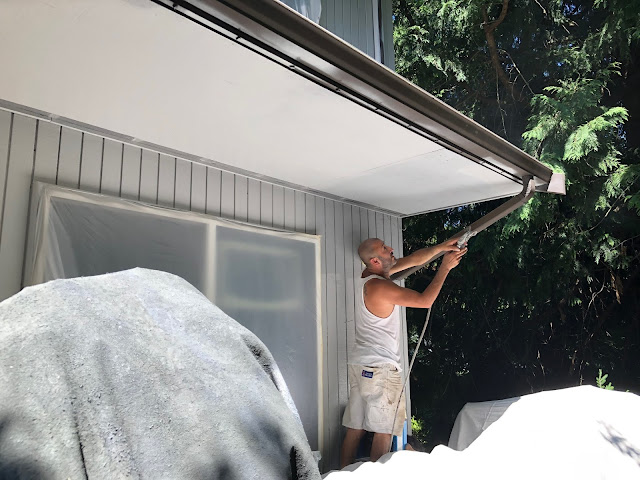 I went to breakfast without Tom this morning so he could be home to oversee the paint crew and the repairman from Washington Energy Services, who arrived this morning to fix the furnace/air conditioning.  When I arrived home from breakfast and running a few errands, he was already finished. The repair was easier than expected and cost less than half of what we expected. Good news! And now, with the house sealed up, we can cool the house down if we need to.

So far though we have been very comfortable with high's in the mid 70's. It's going to reach 80 today though, but so far the house is cool even up stairs. 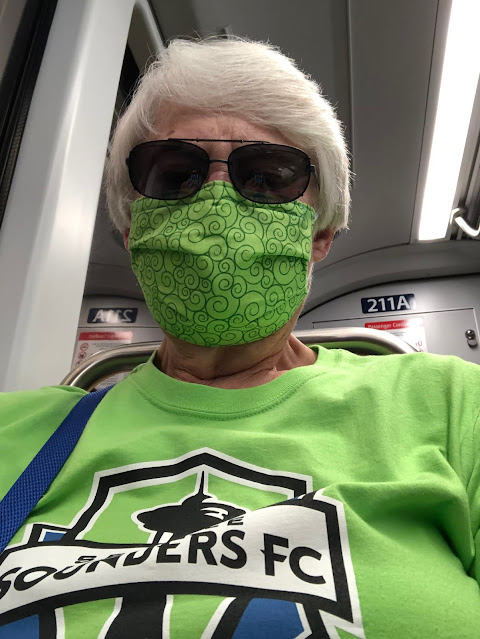 Me on the light rail. Masks are still required on public transportation, but not in the stadium.

We were forced to give up our great seats last year when they closed off the third tier. We had to scramble to find open seats. We got seats on the east side instead of the west side, which means we are in the sun, and even at 70 degrees we were cooking. We bailed and found empty seats up in a shady corner that were not occupied.

The other issue is that the seats are at the top of the section, and while I can take the elevator to get up there, it is next to the Club section that we are not allowed to use. Restrooms and food service are down a whole long flight of steps. I can do steps if I am not crowded and have time to navigate the gaps in the hand rails, but that isn't usually the case.

There are ADA Accessible seats up at the top, in the shade and I am told that from those I would have use of the Club facilities. I have a call in to my ticket agent, but so far he is not returning my calls. I will persist. And when it's hot, I'll just move there anyway. Those seats are empty.

Other than that we have mostly been hanging out at home, doing a bit of gardening in the mornings. Tom has to keep up with the watering of all of the plants that have been moved away from the house and their drip system hook up. We will be happy when everything is put back together, but we are working on being patient.