A Very White and a Very Bright Christmas

White as in SNOW. Bright as in Merry and Bright! Our Christmas day certainly was both!

While most of you have posted your Christmas by now and are moving on, I have been busy - still- so here goes: The Reeder Family on Christmas Day. 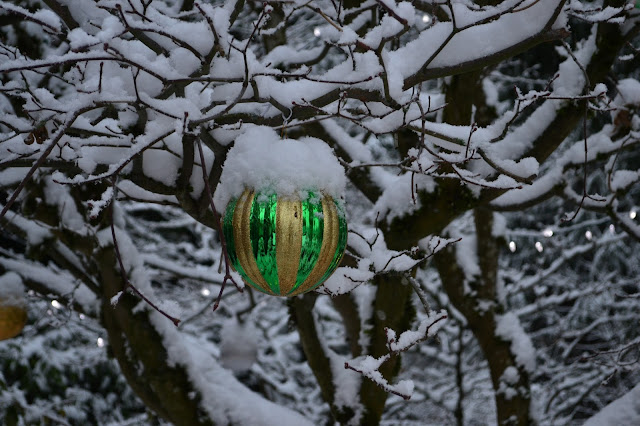 We woke up Christmas morning to a winter wonderland. White Christmases are very rare here in Seattle. Having had trouble sleeping, I was up before the sun and turned on all of the outside lights and the Christmas tree. Then I headed to the shower. When I emerged, Tom had gone downstairs and turned on Christmas music. We hugged with tears in our eyes over the magic of it all.

I took my camera as I went out to get the newspaper, grabbing just a few minutes to appreciate the scene. 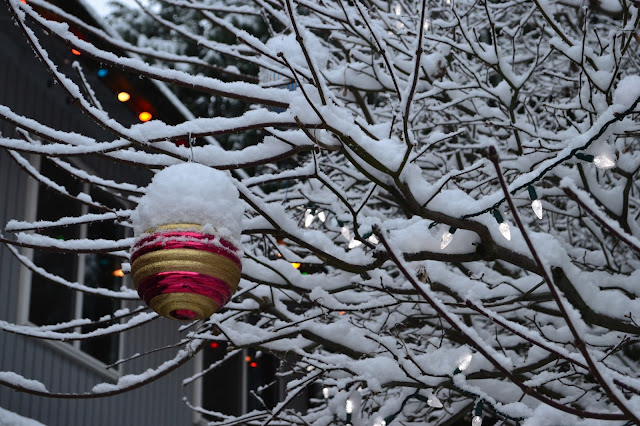 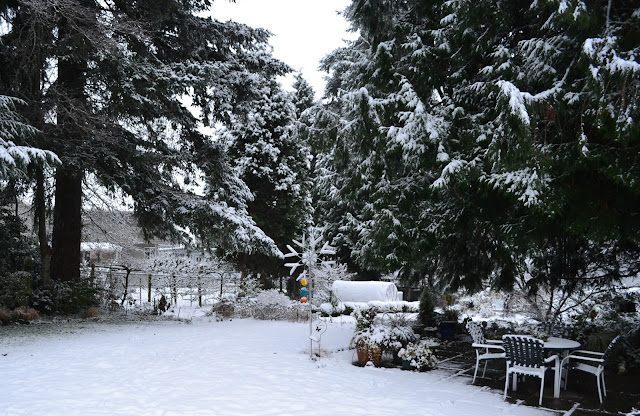 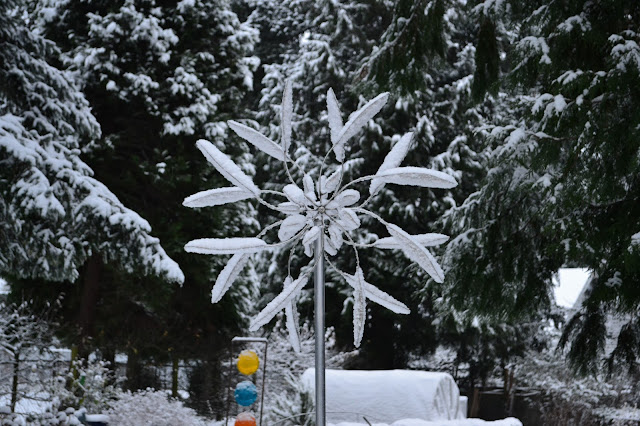 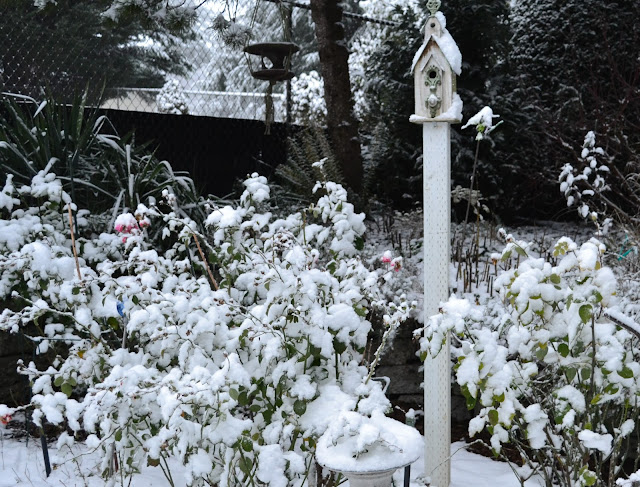 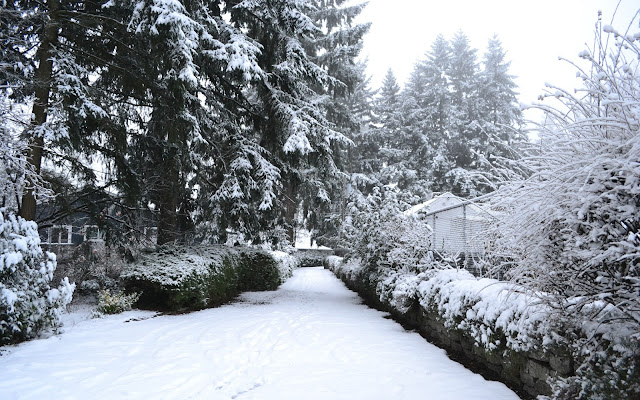 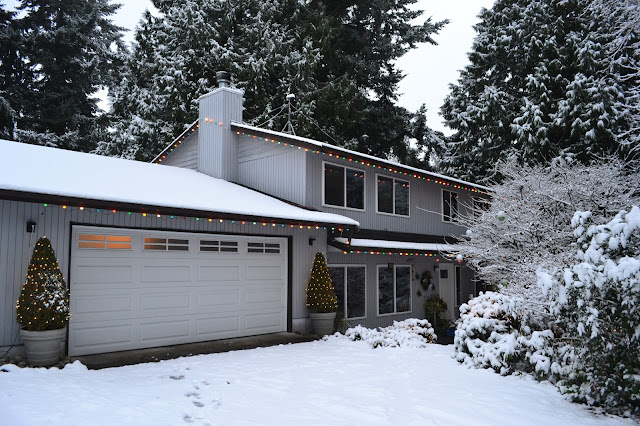 Then it was time to load our sleigh - the old purple mini-van - and navigate the roads to Jill's house.

When we arrived everyone had just extracted themselves from bed. We oldsters were the early birds.

We unloaded the "sleigh" and then assembled to open stockings.

The kitty got hers first. 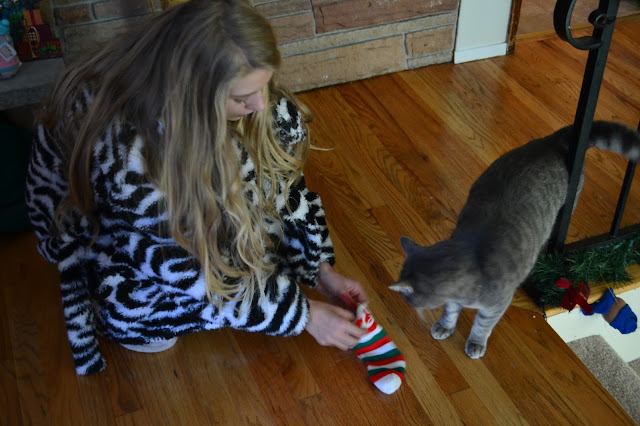 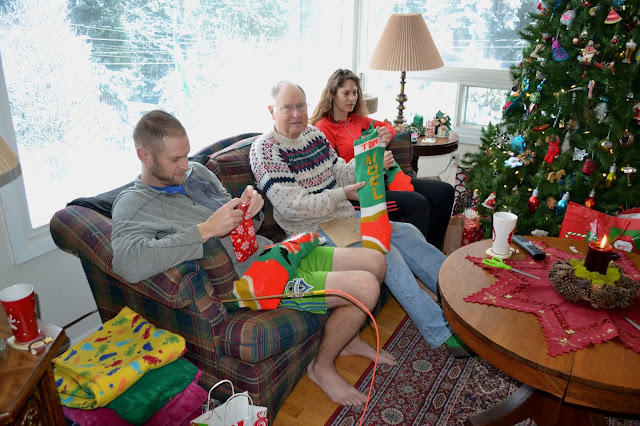 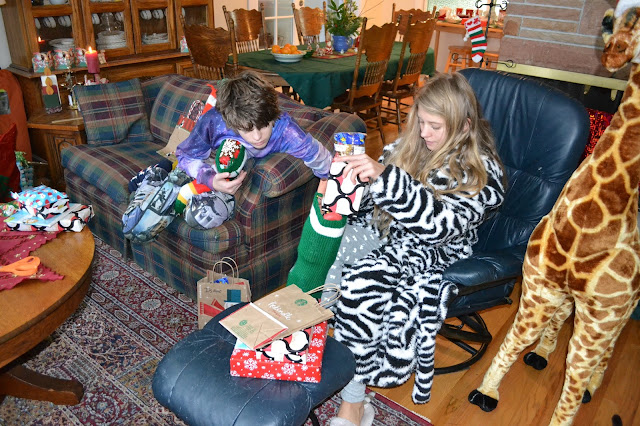 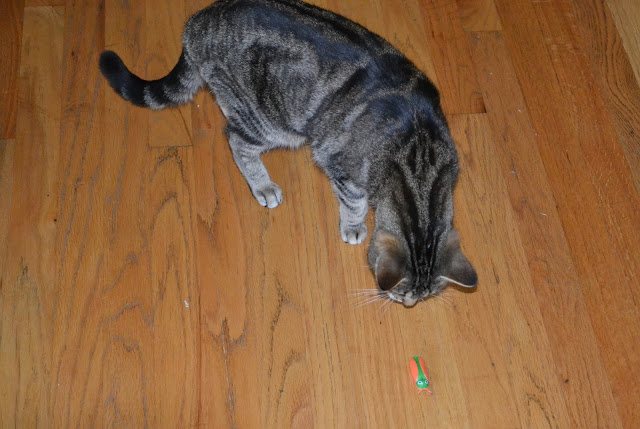 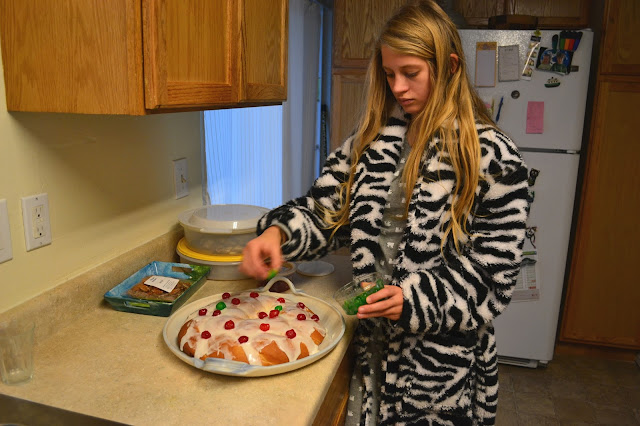 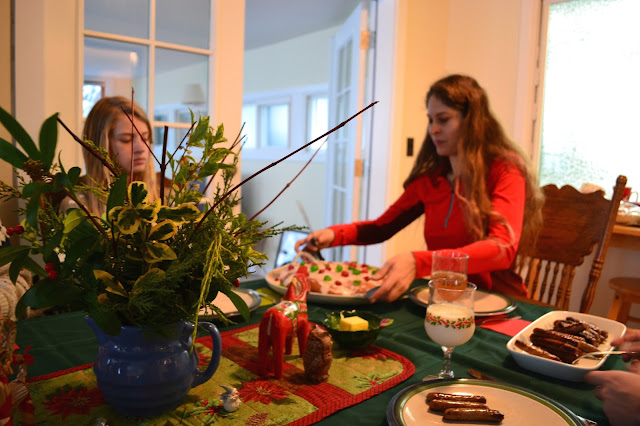 After a little clean up time, it was ready, set, go time at the piles of gifts. We do open them one at a time, which takes a lot of time. It was all time well spent, good times for all. :-) 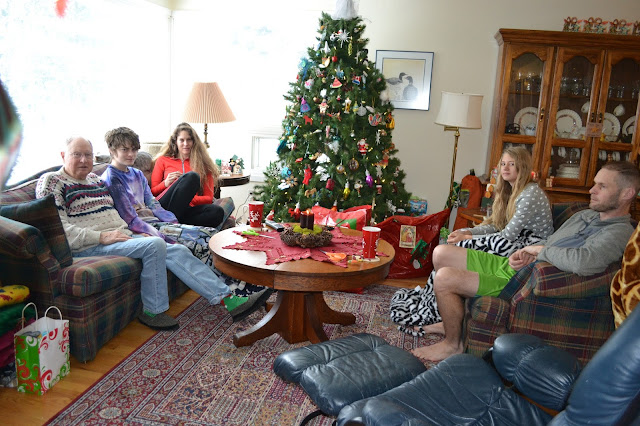 Isaac is really into clothes, and yes, he likes pink. Even his soccer shoes are pink. 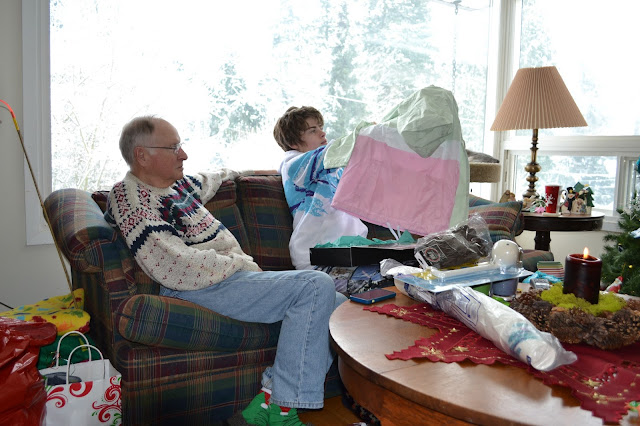 Star Wars Porgs are the "thing" this year. 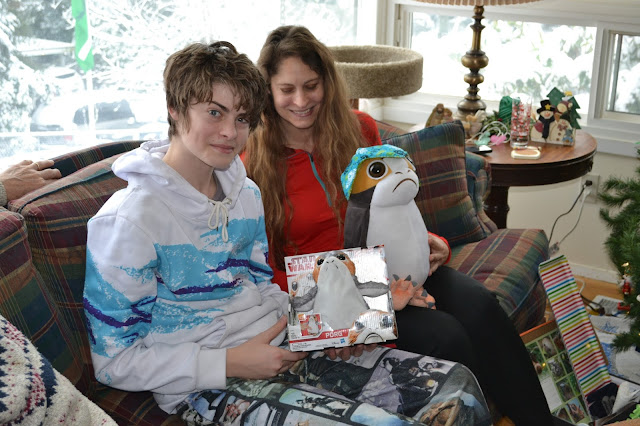 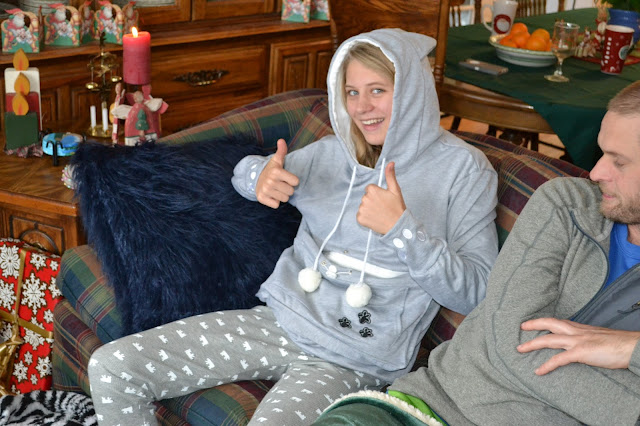 because it has a pocket for a cat!  Mr. Whiskers wasn't sure, though, and he might be a bit over sized for it. Purr fits just fine. 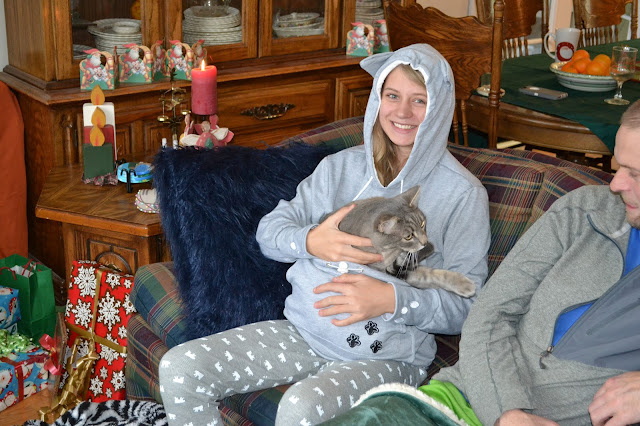 Have I told you that Irene is a budding artist? She gave me one of her paintings, a wonderful mountain and meadow scene, like my favorite place at Paradise on Mt Rainier. I love it! 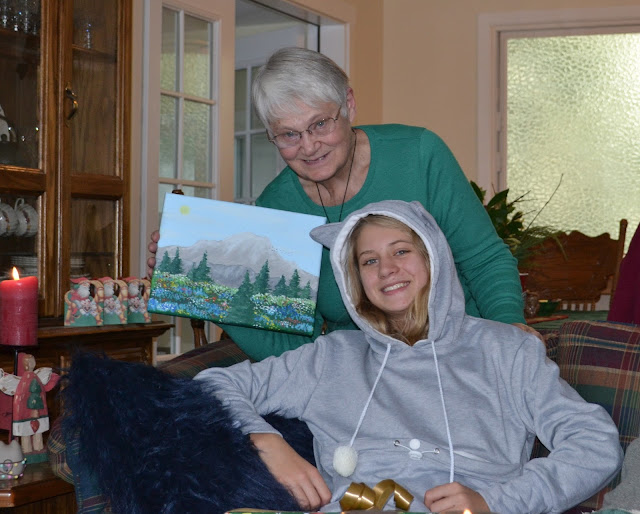 Jake was curious about why he was getting a blanket. But there is much more to this story, which will be revealed in a post of its own. 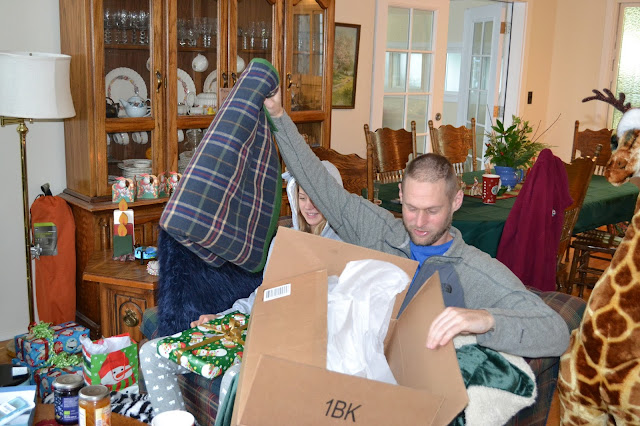 Irene traded her cat hoody for her new giraffe pajamas, and hugged last year's gift giraffe, who was invited to the party. 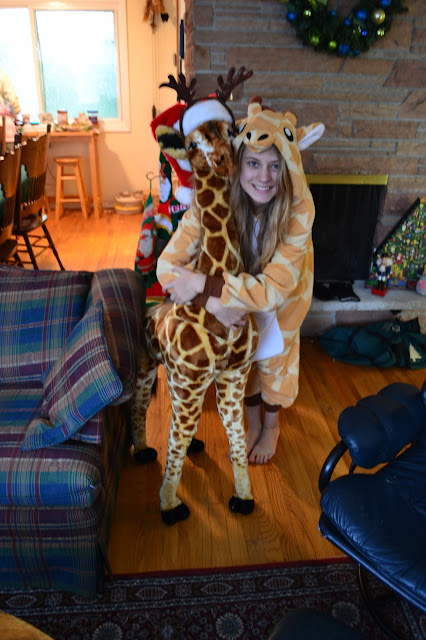 After gifts there was a bit of a rush to get the turkey started on the BBQ grill.  We stuffed all the sorted gift wrapping into recycle or non-recycle bags and piled up the boxed to be reused.

Then everyone settled in to play with new electronics or take a nap or read their phones, or....

As for me? Well, I chose to go outside and play. I made a snow lady. 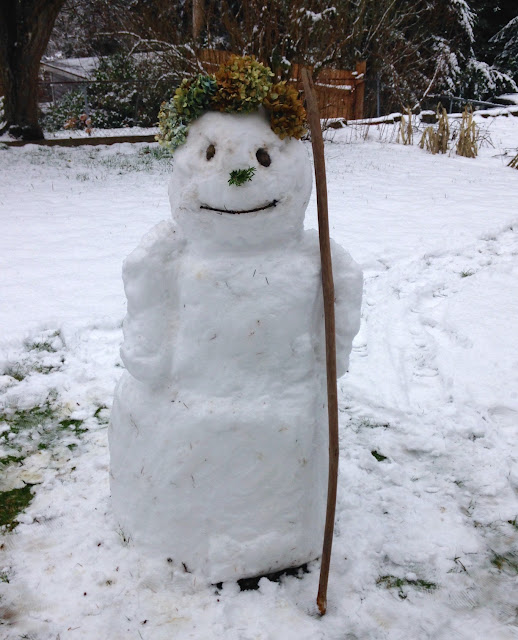 Then I rang the doorbell to get attention and made Irene take my picture. The kids did come out on the front porch and applaud me. 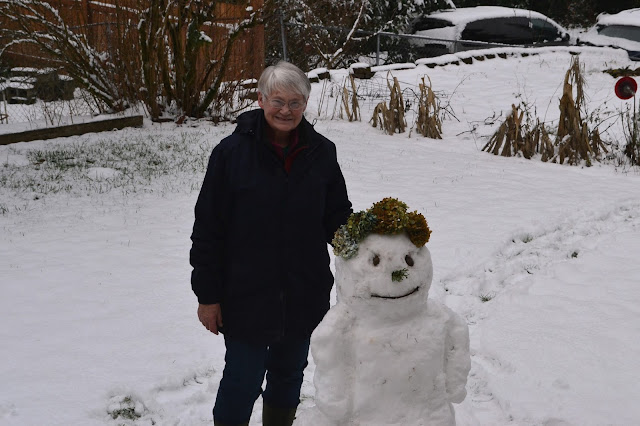 There was lots of cooking going on in the kitchen, but this time all I did was stir the gravy. Well, I had made the stuffing the day before. Tom managed the cooking of the turkey. Thank you, Jill and kids for doing all of the rest.

The table was set. 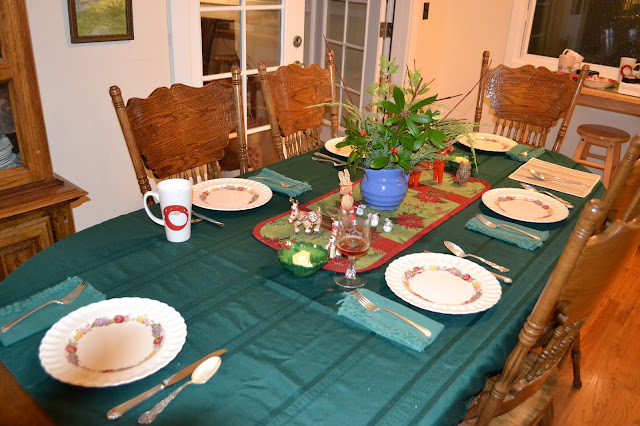 The turkey was off the grill and resting. No, it isn't burnt. It is blacked from the applewood smoke on the charcoal grill. So yummy. 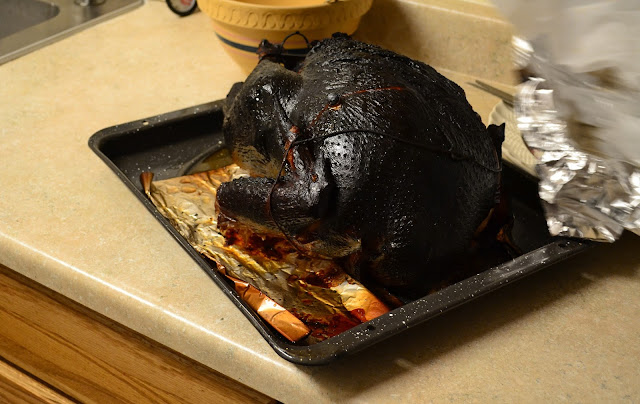 And then there was more eating! 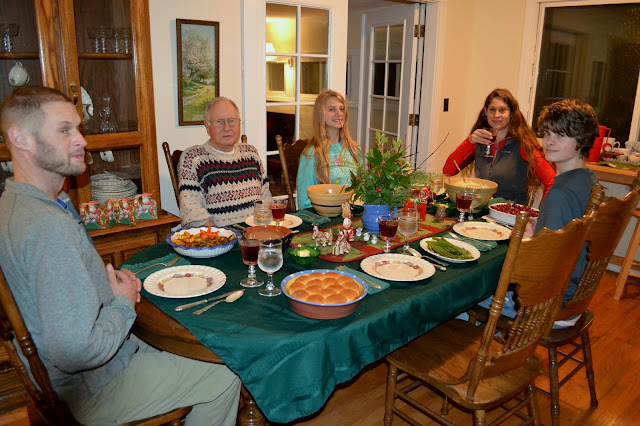 Followed by clean up and cookies, and some game playing,  before we loaded up to return to our own homes.

It was a Merry and Bright Christmas Day.
Posted by Linda Reeder at 11:36 AM