Saturday, June 25th. The day summer arrived and it got hot!

After our usual, sort of slow start, we were geared up in our summer weight Sounders garb and off to the light rail station to go to the stadium for a 12:00 noon Sounders match. We planned on getting some light early lunch at the Starbucks at the station near the stadium, but they were closed. They were on strike in sympathy for the workers of three other Starbucks stores nearby that dismissed all of their workers without much notice and then hired back only a few. Some of these stores have been working to unionize and this was probably pay back, but of course the company had other stated reasons. Starbucks used to be a great company to work for. Times change.

So we had to settle for eating pizza in the air conditioned Club section of the stadium. :-) 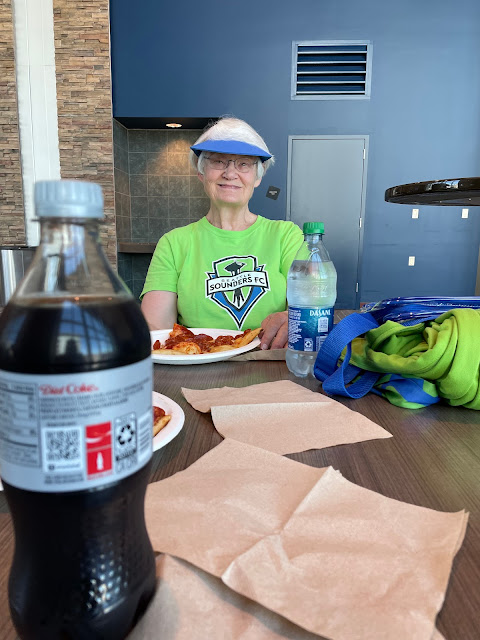 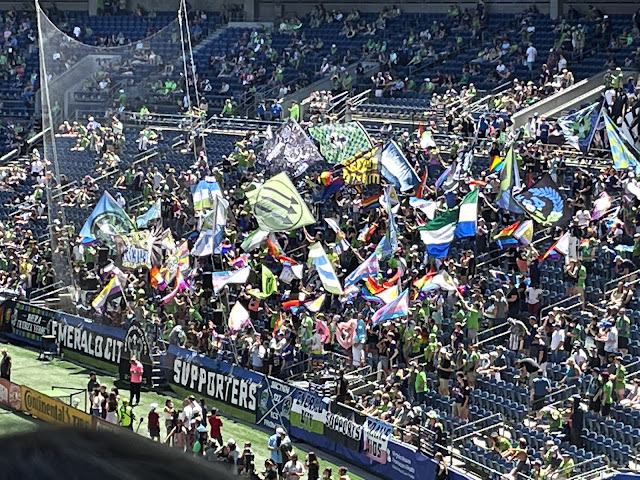 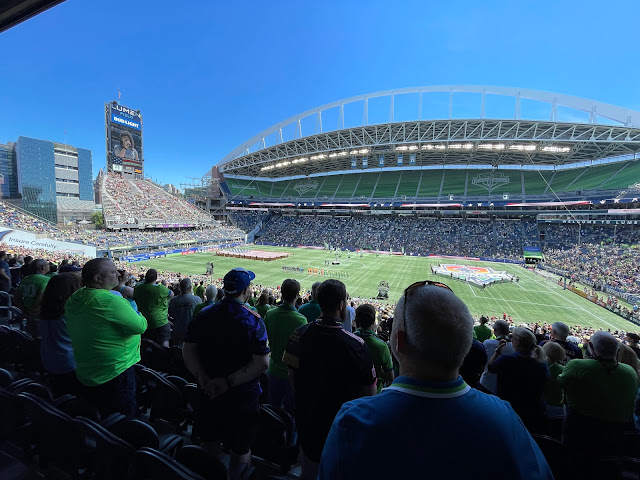 I didn't join in singing the National Anthem today. I didn't feel much like celebrating our nation right now. 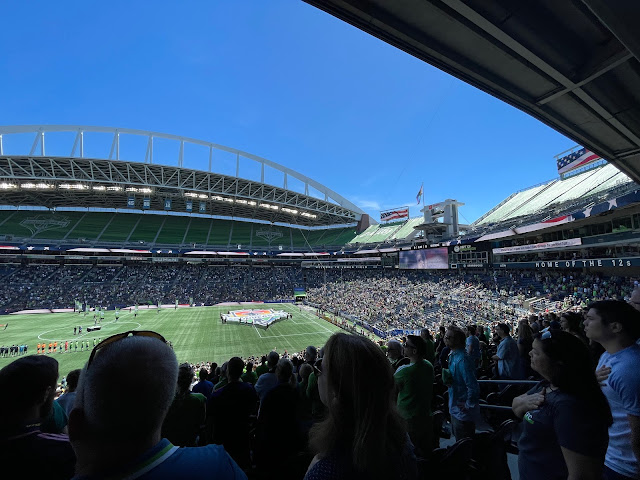 It was a good match and we beat Kansas City 3-0.

We were glad we had seats in the shade - that was a big consideration when we bought our season tickets - because now it was hot. We got home about 3:15. The downstairs of the house was cool and I stayed there for about an hour, catching up with your blogs, working today's Wordle,  and keeping up with an on going Facebook "discussion" I was having, first with my sister yesterday, and then continuing over two days with a former student who is a lawyer and likes to tell us all how federal law is different than state law, that's just how the constitution and our country work, and overturning Roe was the right legal thing to do. I object!

Eventually I came outside, cleaned up the patio a bit, and Tom had been busy putting up the sun umbrellas and bringing out the patio rockers.

We both spent a little time here. 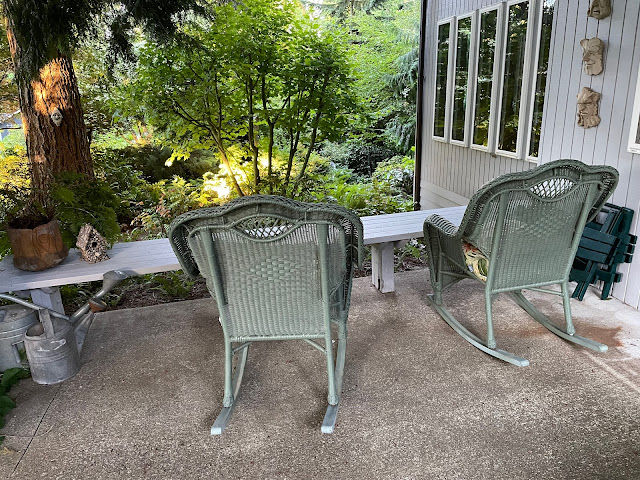 Eventually we went inside and had a light dinner. Then we came back outside. 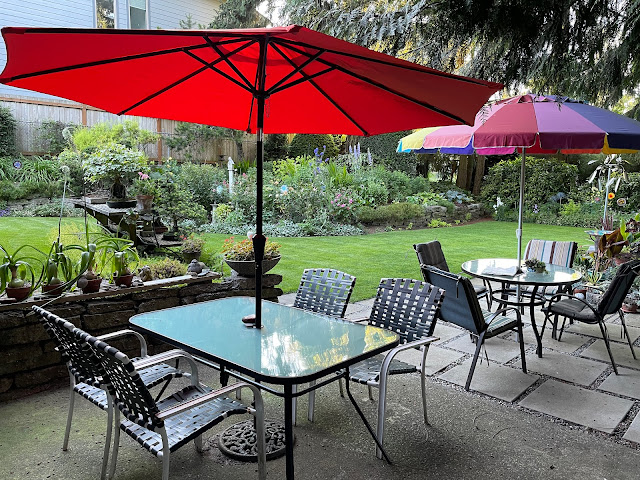 The sun was off the yard now, set behind the tall houses, and it was still warm but green and pleasant.

Tom got the lawn mowed. 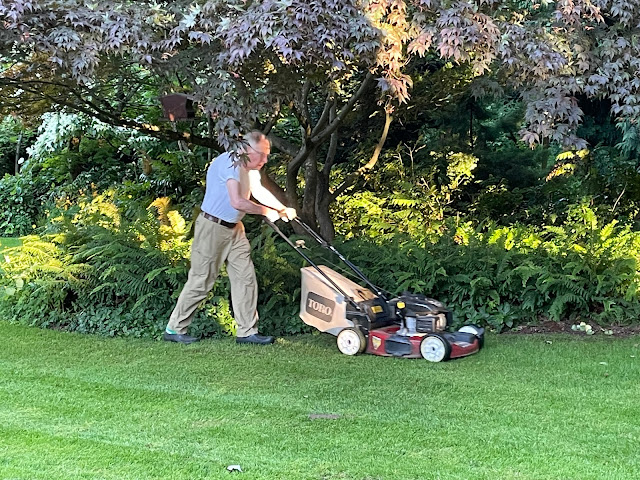 I settled at the patio table to finish reading the paper. Charlie/Mewdini came to visit me. 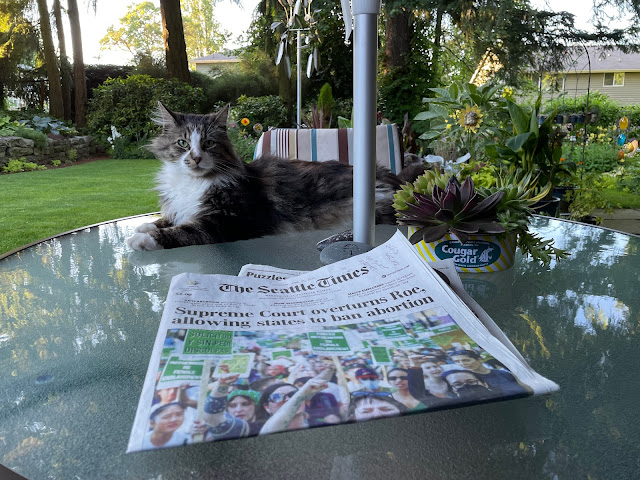 Now I've spent a long time going through all the photos I took while we were on Whidbey Island this week - that's another post or two- and getting this post put together. Now it's time to hit Publish and go find some ice cream. It's 77 outside and 77 inside here in our upstairs office. I'm going back downstairs.
at June 25, 2022 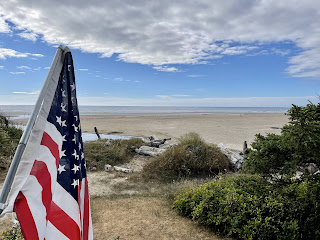