Sports Are Fun, Even Remotely

I have two favorites when it comes to spring spectator sports - high school track meets and soccer. The soccer might be youth soccer or professional soccer - just soccer.

When our son and daughter were in high school, both participated in track and soccer. One of my favorite things as a parent was going to the high school track meets, especially when both were on the team.

I was looking forward to repeating this pleasure with my grand kids. Isaac ran track his first two years, and we loved watching him and his teammates. Last year Irene was a freshman and ready to join the team. They had their first practices and the first meet was on the schedule when Covid wiped it all out. School was shut and sports were gone.

Now, a year later, Isaac and Irene are back in school two days a week. Isaac is a senior, 18 years old and has a job. When he turned 18 in January he was promoted to shift manager at the Papa Murphy pizza shop where he works, has been able to buy a car, and is now just treading water when it comes to high school. He was accepted at Western Washington University in December. When track season started he opted out. He would rather work.

Irene is now a sophomore. She has several years of high school to look forward to. She played soccer on the school team this winter and is now running track.

We wanted so badly to go and watch, but alas, the stadium is closed to spectators. Jill got around that by volunteering to help at the home meets. I asked why the track meets weren't being live streamed like the soccer matches were.  When she asked the athletic director, she was assigned the job. So Wednesday Jill and one other parent, using iPads, broadcast the track meet over the school network set up for that purpose.

We got to watch Irene! She ran the 300 meter hurdles, the 100 meter hurdles, and the lead leg of the 4x400 m relay. And when Irene was competing, Jill was there to take photos and video with her phone while her videographer partner took over the live streaming.

Live stream set up in our family room. 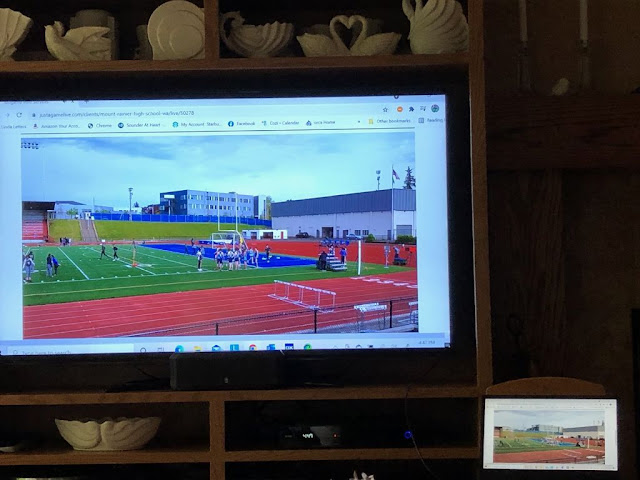 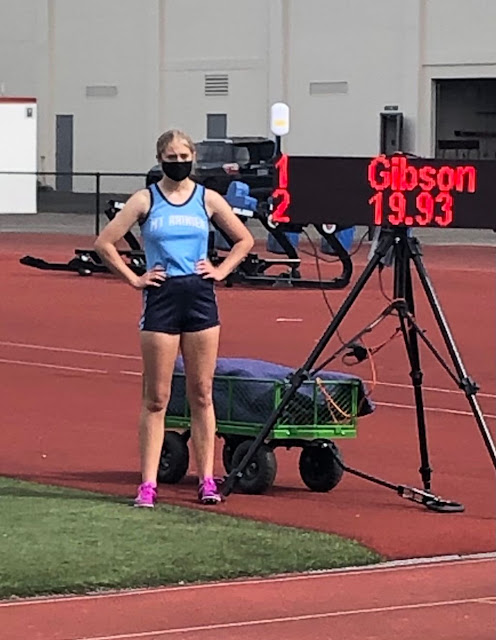 Irene running the 400 m relay. The other school didn't have a relay team, so they won that too. 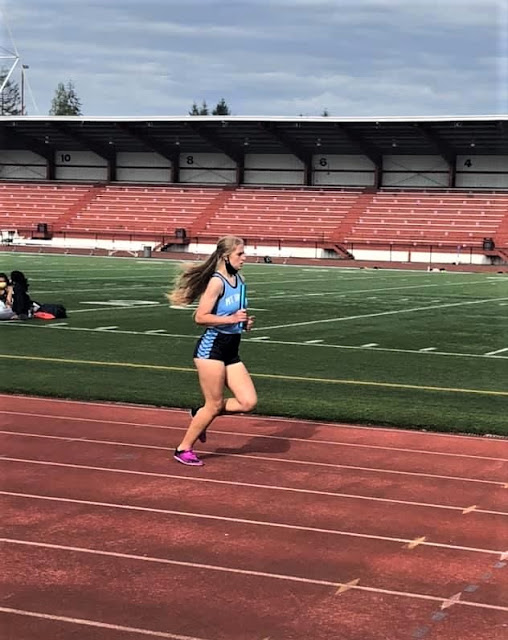 We loved being able to watch!

Our other team, the Seattle Sounders, are now into their season too. There are 35,000 season ticket holders and only 7000 are allowed in the stadium, so we were not among the lucky ones to score a seat. but while we miss going to the stadium, we are quite comfortable watching at home too.

The Sounders so far are at the top of their division, There is another game Sunday. I'm not sure if it's at home or away, but it doesn't matter. Right now they are all "at home".

Sports are fun, even remotely.