The first weekend in August is quintessentially Seattle.

This is SeaFair weekend, the culmination of weeks long community celebrations and parades, the Torchlight Parade last Saturday, and finally the hydroplane races on Lake Washington.

The Navy fleet is in town. Tourists are everywhere, The Blue Angels are constantly buzzing the city in the sky overhead as they practice and then put on three air shows in three days. Locals who can't handle the noise and the traffic and the general buzz leave town. The rest of us soak up summer in Seattle.

Last Saturday Jill and the kids ran the Torchlight Fun Run 5K. Jill wanted to do it because you run on the viaduct, and this is the last year it will be standing. The new tunnel is complete, and soon the viaduct will be coming down. Jill is not a runner, but her kids kept her going the whole way. 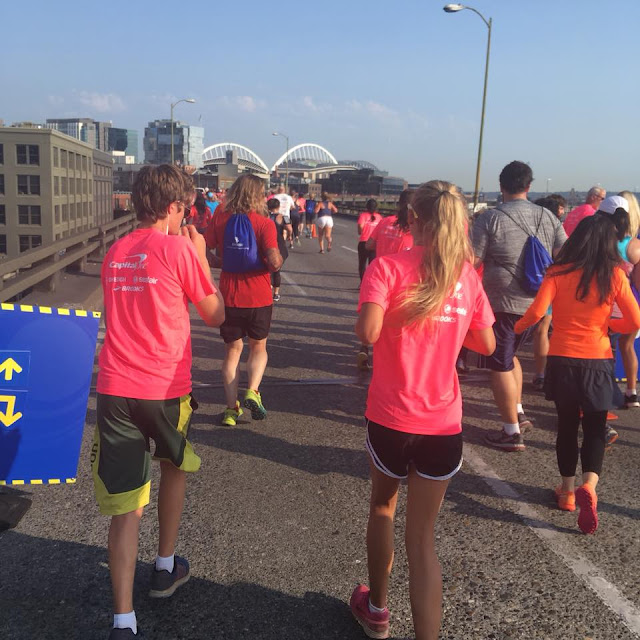 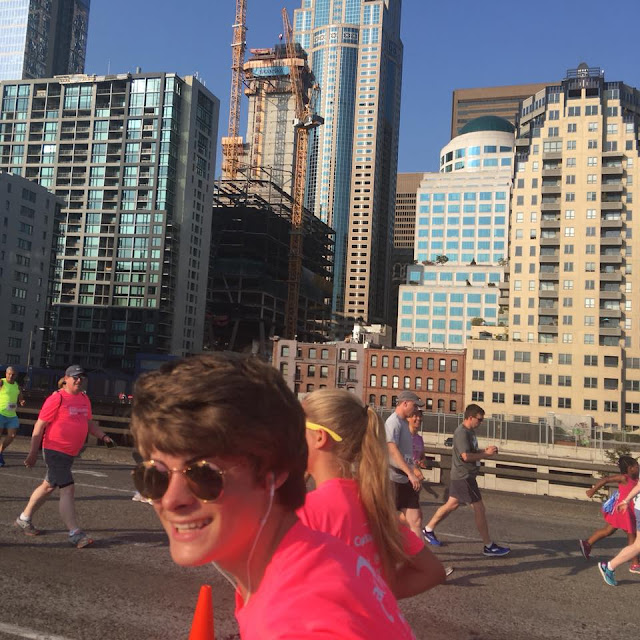 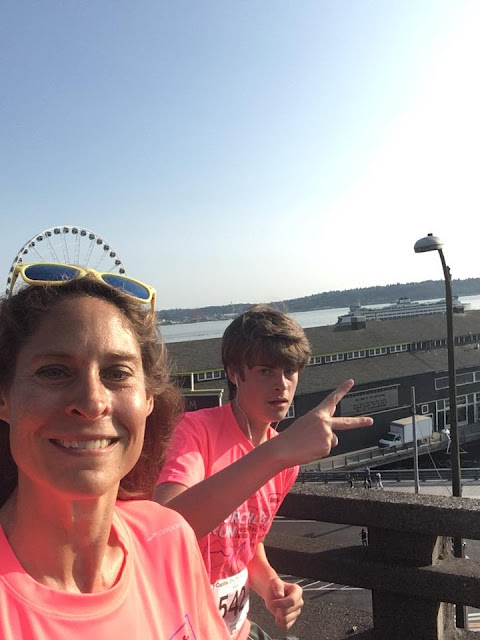 In Jill's words, she said her kids "tried to kill me". But they were all smiles at the end of the run. 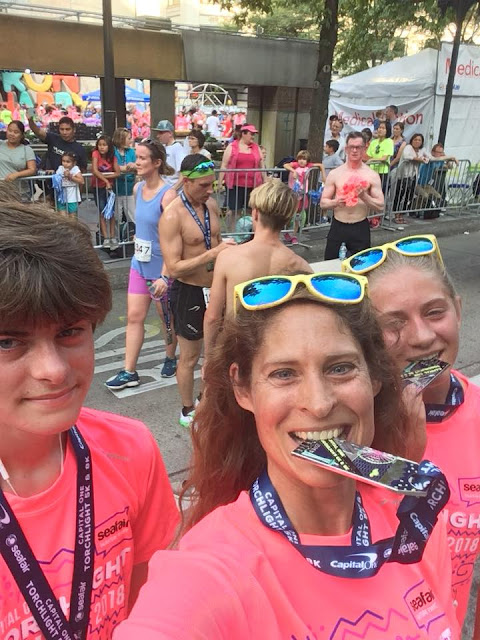 Then they stayed for the Torchlight Parade that lasted well after 10:00, with pirates and clowns and drill teams and bands and all kinds of fun stuff, and fire trucks and cops on motorcycles too.

We could hear them in out yard when the Blue Angles arrived on Tuesday. Jill and Isaac left town on separate adventures, and Irene came to us on Wednesday.  Tom and I usually go to Lake Washington on free day Friday to watch the air show, watch the hydroplanes test and qualify, and get a taste of the flavor of the festival. It's my thing more than his, but he comes along. We took Irene with us this year. 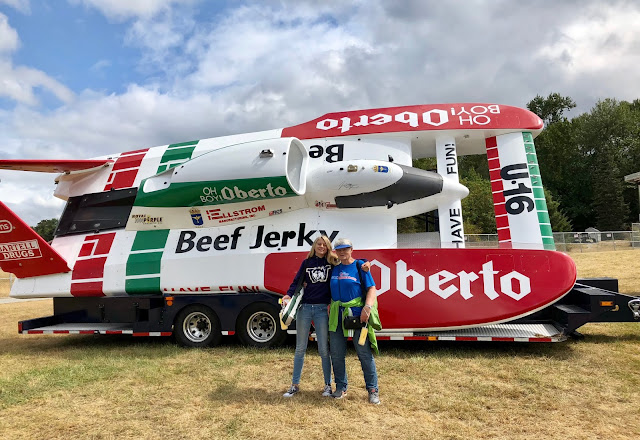 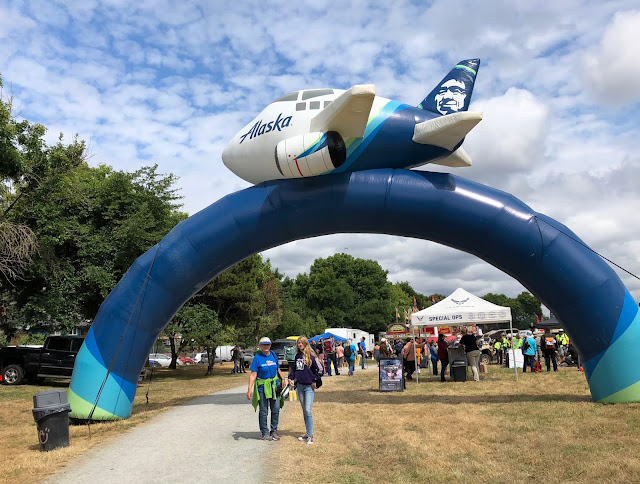 We expected cool damp weather, but the clouds broke up early. We walked along the lake, past the pit area, to find just the right place to watch the action, that place where Jill and Jake and the kids have been camping out on Race Day Sunday in past years. This year no one is available to go on Sunday, so we were representing the clan tradition on Friday. 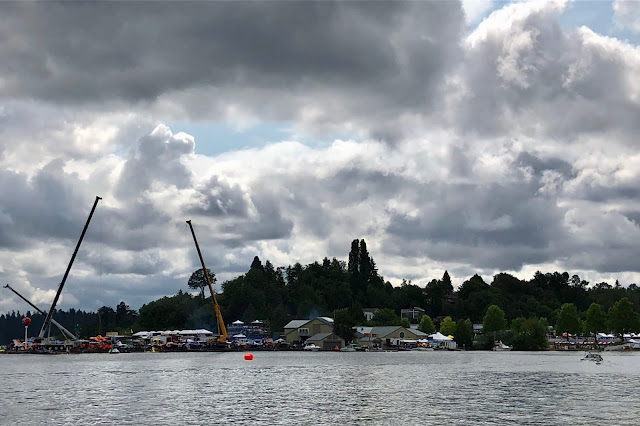 When we arrived, the hydros were taking turns out on the lake, testing their boats and throwing up rooster tails as their turbine engines whined. 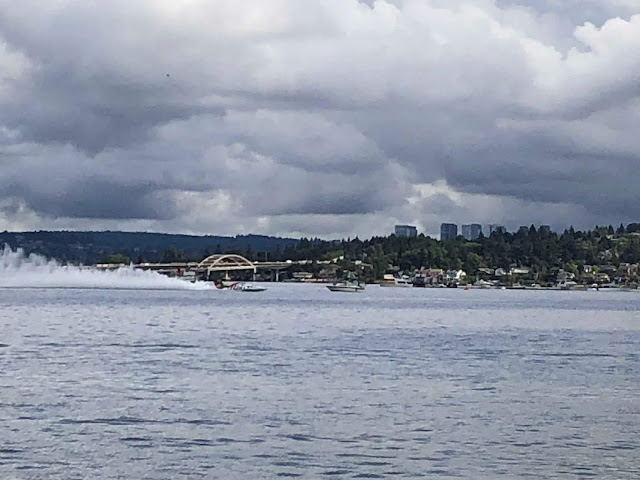 I watched everything. Others occupied themselves differently. 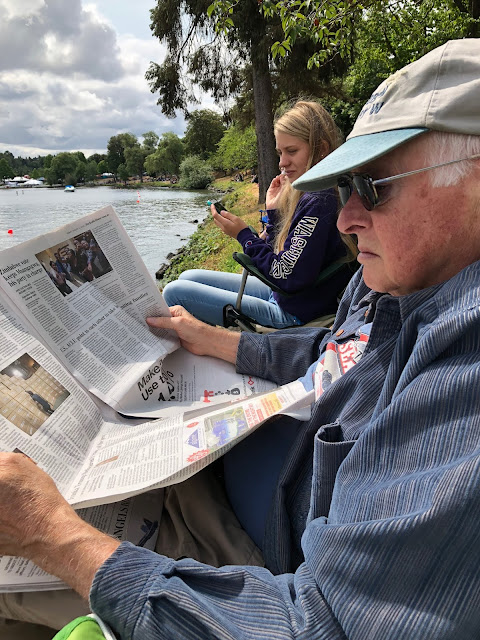 A flotilla of geese came by. 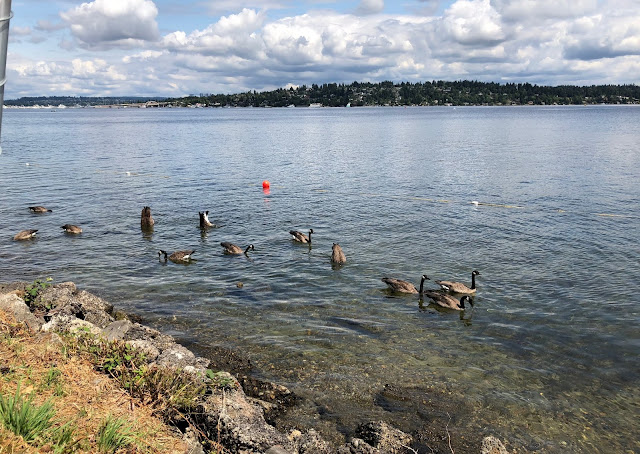 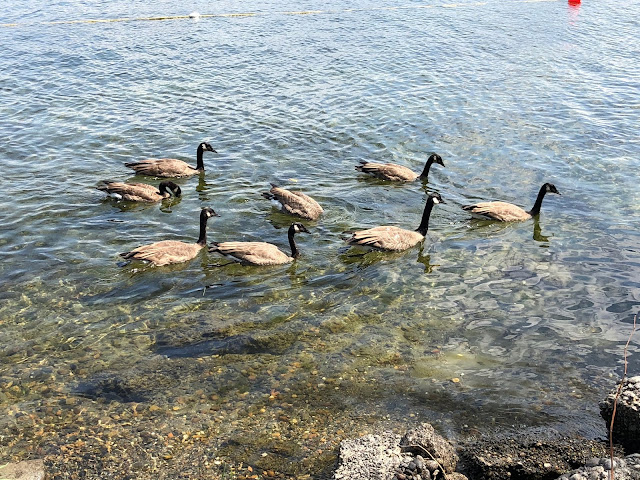 And then these birds showed up. I love the power and the roar of these jets. The show the Blue Angels put on is great too. 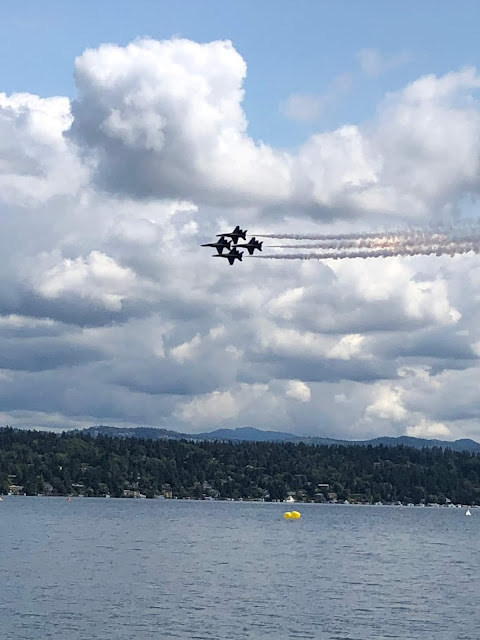 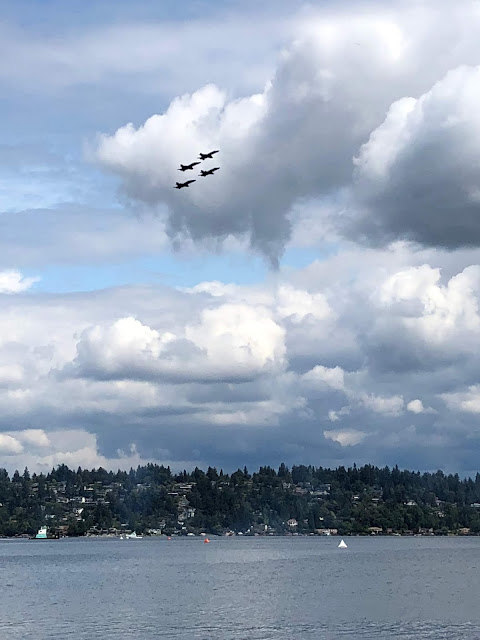 Solo pilots climbing into the sky, spinning, and then dashing down in death defying dives. 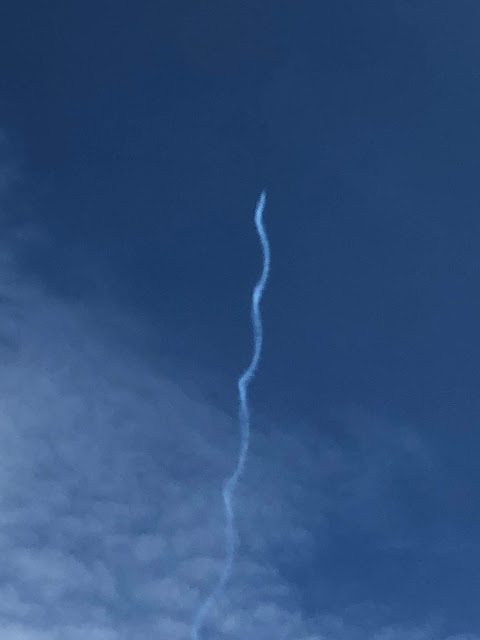 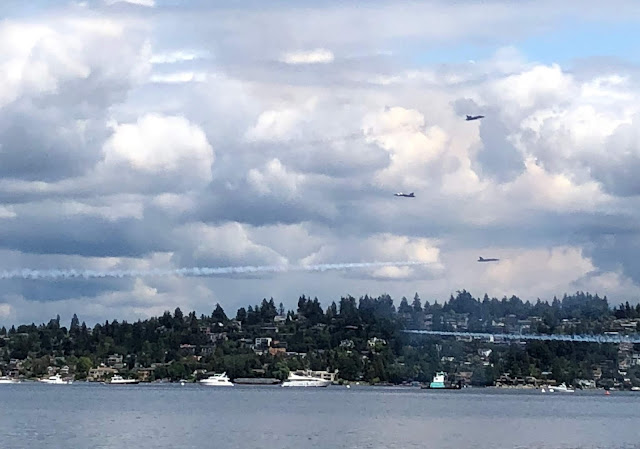 The color of this photo, taken with my phone, came out strangely, but I like it. 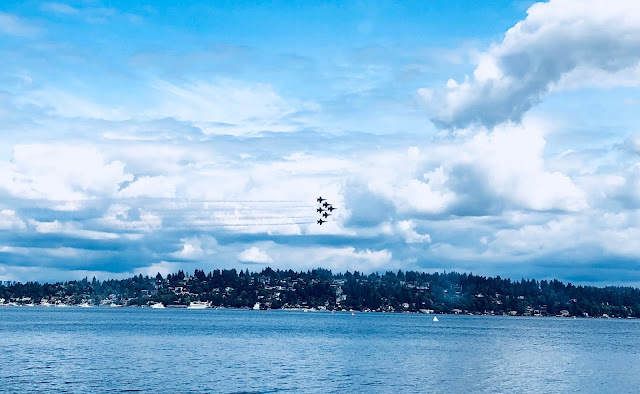 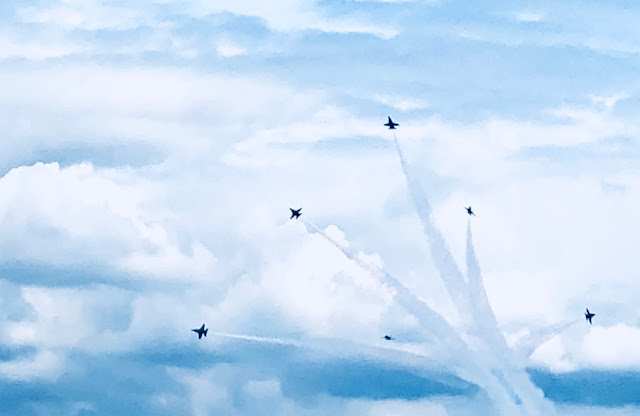 Then we went to find fair food and check out the exhibits, looking for free stuff. This giant sand castle was cool, and real. 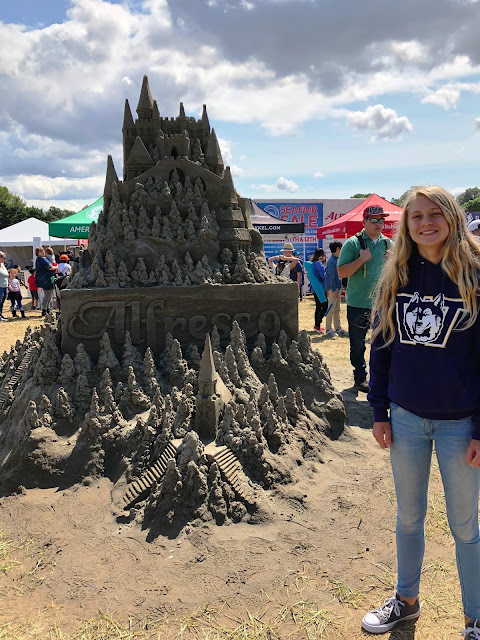 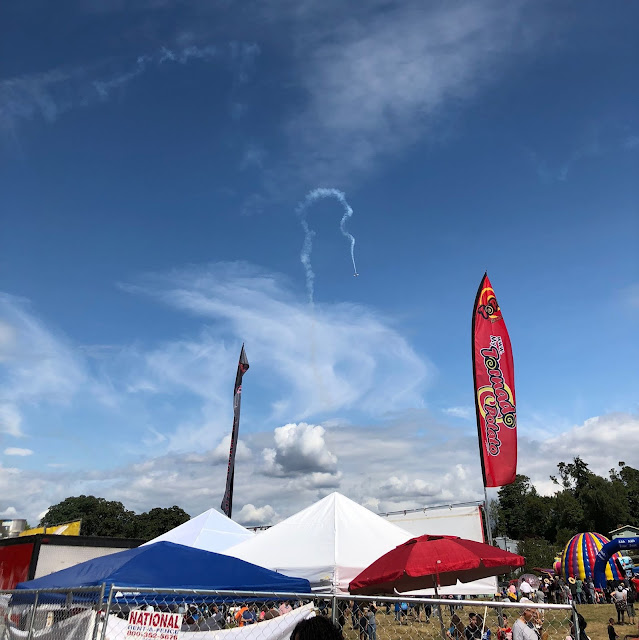 As the day heated up, the lemon aid stand was popular. I waited in the shade. 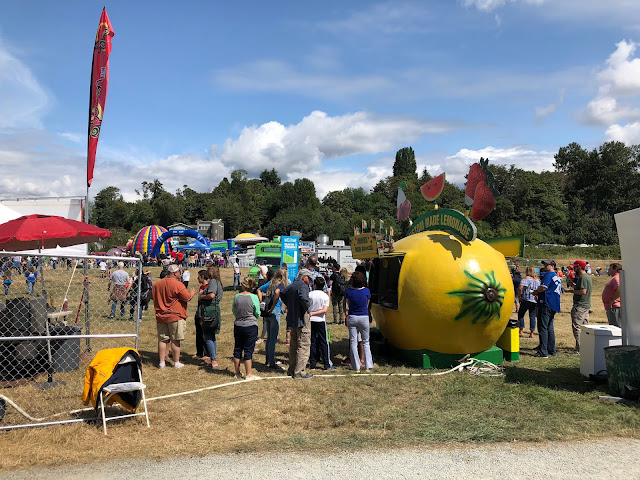 Tom found some lobster, and Irene and I found ice cream. Then Irene made me play mini-golf and spin the wheel and we won hydro hats. Grampa had to wear hers. Of course we were wearing our hydro shirts. 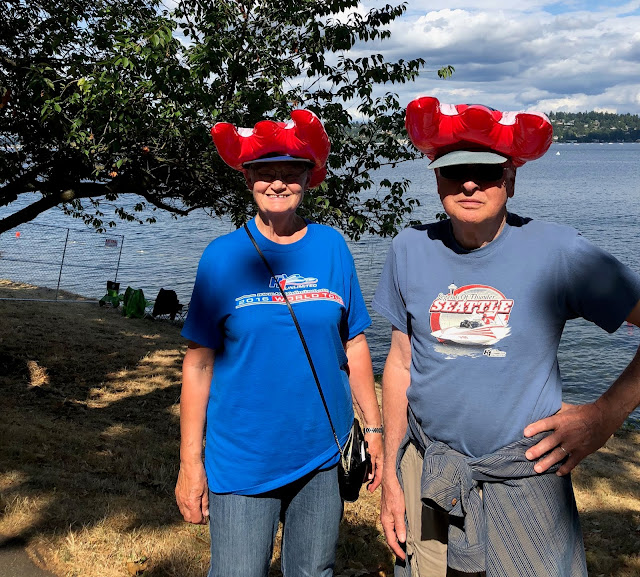 Back in our chairs by the lake, where the crowds had dramatically thinned out after the airshow, we watched vintage hydros take the race course, their piston engines thundering. We old folks love hearing the thunder boats. . 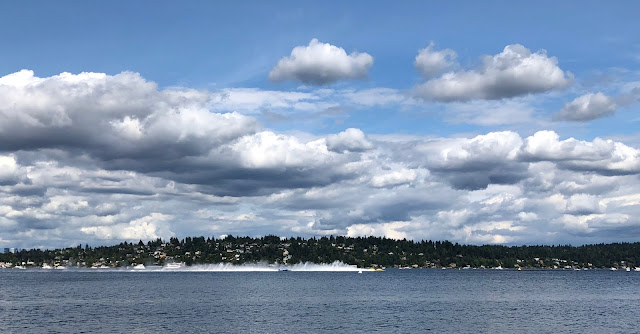 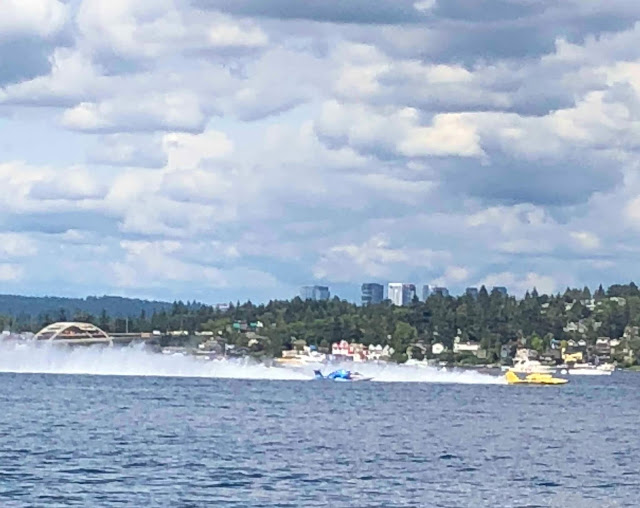 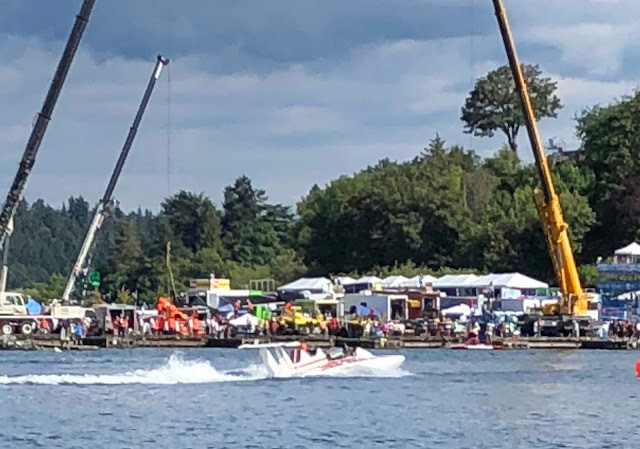 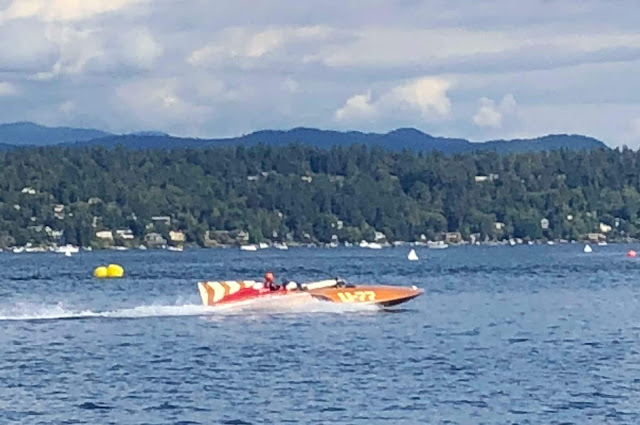 Having to be towed in was a frequent event with the old boats. But so was death, as the old boats had no safety canopies like the new turbine boats do. 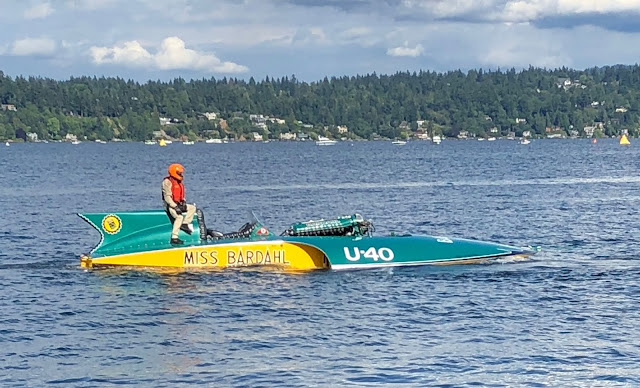 We sat by the lake until 6:00, watching the competitive hydroplanes run qualifying laps, and set the field for the official race, which started on Saturday and ends on Sunday. 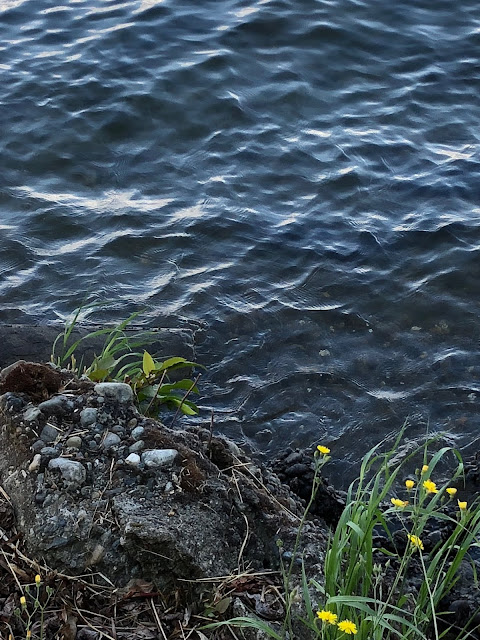 The view at my feet.

I'll watch the final on TV Sunday afternoon. Tom might pay attention. We dropped Irene off Saturday morning at her church for her adventure, going with her youth group on a mission to serve homeless in San Francisco.

Tom and I are quite happy to be staying home.
Posted by Linda Reeder at 8:43 PM